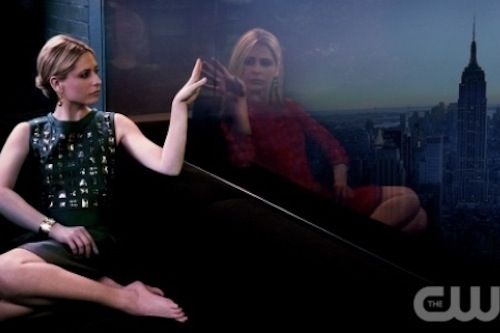 In "First Look/Last Look," I will be doing very quick reviews of selected new fall shows, panning for gold in the fetid riverbed of the 2011-2012 network television season. While I hope this experiment yields at least one new show that I will want to add to my regular viewing—if not reviewing—schedule, I'm not holding my breath. Call me pessimistic, but, in most cases, I expect my first look to also be my last.

I was, and remain, a huge fan of Buffy the Vampire Slayer, Joss Whedon's brilliant series about female empowerment and the horrors of high school. But Sarah Michelle Gellar was never the draw: she was perfectly fine—and occasionally exceptional—in the title role, but Whedon's writing was the real star of the show. Gellar—particularly in the later seasons—often seemed like the cool and vapid center of a more colorful and talented ensemble of actors.

So the promise of Gellar's return to television without Whedon—after a big-screen movie career that included some forgettable comedies, a couple of Grudge movies, and two Scooby-Doo epics—didn't exactly fill me with excitement. And it must be said that Ringer, her new series, does not represent an artistic leap forward for her career.

Gellar plays Bridget Cafferty, a woman with a shadowy past. She's a recovering drug addict, she has a criminal record, and she's the reluctant star witness in the federal trial of a comically evil-looking dude. Fleeing both the feds and the mob, Bridget runs to her identical twin sister Siobhan (also Gellar, of course), a high-society schemer from whom Bridget is estranged due to some as-yet-unrevealed tragedy in their pasts.

So estranged are the sisters, in fact, that no one in Siobhan's world knows Bridget exists—not even her snotty husband Andrew (Ioan Gruffudd). This turns out to be a highly convenient plot contrivance: when Siobhan appears to commit suicide by throwing herself off a boat, Bridget simply assumes her sister's identity. (Of course she would!) Naturally, no one notices. (Of course they wouldn't!) But Siobhan's life turns out to be fairly complicated as well, with hidden pregnancies, secret affairs, estranged husbands, resentful step-daughters, attempted murders, and oh-so-many other secrets still to discover.

The creators of Ringer seem to think that clichéd soap-opera elements are somehow intriguing if you put 17 of them into play all at once—but of course they're wrong: "overly-complicated" and "dumb" is a deadly adjectival combination for any show, and Ringer is about as dumb as television gets. There is not a single original idea here, least of all the Prince and the Pauper/Man in the Iron Mask/Two-Petes-in-a-Pod premise. What's worse, there is not an ounce of intelligence or a hint of humor in the script, and the paper-thin "characters" all seem like they just wandered out of one of those cheesy murder mystery party games.

Of Gellar's performance, I will only say that playing either sister—the wealthy scheming socialite, or the ex-junkie, ex-hooker mob informant—would be a massive stretch. To see her attempt to play both characters simultaneously—acting opposite herself through amateurish doppelgänger effects—is unbearably painful to witness. (Actually—though this is the least of the show's problems—the special effects throughout are a disaster. Apart from the twinning element, this should not be a technically demanding show, yet a simple scene of boating on a lake boasts the least convincing aquatic green-screen effects since the Marshall family went rafting.)

At best, Ringer could have been a guilty-pleasure: with its sub-literate soap opera elements, it should have aspired to be stupid fun. But I actually think that everyone involved here sincerely believes they're making a smart, serious program, and this gross misjudgment—combined with excruciatingly bad execution—ensures that "fun" is nowhere on the menu. There's nothing worse than stupidity that doesn't know it's stupid, and—though this is my first pilot of the season—I honestly don't expect to sit through anything worse than Ringer all year.