I really don't know how much longer I can do this. Torchwood: Miracle Day is terrible. With preposterous plotting, wildly inconsistent characterization, and clumsy storytelling, Miracle Day is too stupid to take seriously, and too self-serious to be fun.

Torchwood has reinvented itself with every series, and now it has done so again, but it's abandoned everything that ever worked in any of its previous iterations.

The Buffy/X-Files spirit of the first two seasons was only occasionally successful, but on those occasions it achieved a fun, PG-rated comedy/horror aesthetic that was atmospheric and affecting.  The third series, Children of Earth, left most of the humor and horror—and some of the fun—behind, but in their place it delivered a mature and brilliantly paced science fiction story that dealt with big issues seriously.

More importantly—in all three seasons—it was the characters we cared about. Creator Russell T Davies is—as I think he would admit—at his best when he's working with real human emotions, and his best is very good. Though there was a great deal of inconsistent characterization across the three seasons, the fantasy and sci-fi shenanigans always seemed designed to bring the characters to genuine, recognizable, deeply affecting emotional moments. I re-watched Children of Earth recently to remind myself how good this show can be, and I was reminded of how many wonderful scenes there are of characters just sitting and talking like real people we could actually care about. (We had Gwen's interviews with Clem and Rupesh, several scenes between Gwen and Rhys, and Ianto's coming out to his sister, just to name a few.) 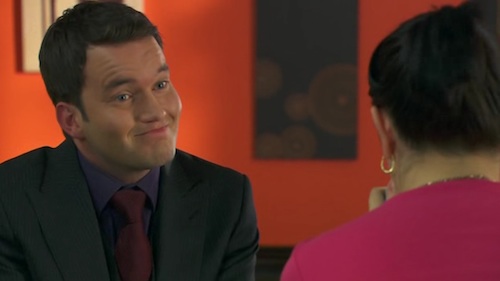 All of that is a fading memory at this point. The campy fun of the first two seasons is nowhere in sight: Miracle Day clearly wants to recapture the more mature lightning-in-a-bottle that was the third season, but they've not only forgotten how, they've also tried to marry it to a dumb American action show from the 1980s like The A-Team or Airwolf.

Mostly, they've forgotten to let us care about the characters. There are nods to the kinds of scenes that used to work—Jack's drunk-dial of Gwen last week, the visits Rex and Esther make to relatives this week—but these scenes are undeveloped and unconvincing. (There's no time for character work now: we need to stage a wholly derivative—and wholly unbelievable—Mission: Impossible type break-in of the most randomly secured building in Los Angeles.)

I've always felt that list-making is one of the laziest forms of writing possible—which is one of the reasons it's so prevalent on the internet—but I also understand the impulse. Writing is a labor of love for me, and I'm not feeling any love for this show at the moment, so forgive me if I indulge in a (far from comprehensive) list of what pushed me over the edge this week: 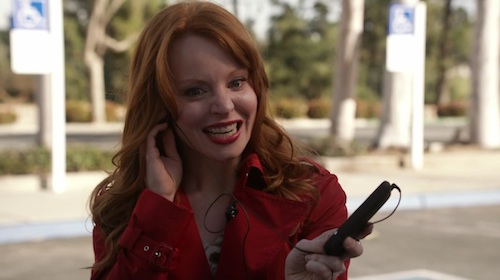 Who is driving this bus, anyway? Is anyone—Russell, I think that would be you—reading scripts from week to week to make sure one writer's treatment of a character doesn't totally clash with whatever came before? Two weeks ago, when she first appeared, I would have bet money on Jilly Kitzinger (Lauren Ambrose) being an alien or a demon: she was so sycophantically evil, kissing up to pedophile Oswald Danes (Bill Pullman), that she seemed she couldn't possibly be human. This week, she gets the creepy-crawlies just being in the same room with him. "It's your hands," she says. "I can't look at your hands without thinking about what they did." Actually, this interpretation of Jilly—while coming out of nowhere—is a more interesting one; unfortunately, it only lasts until the end of the episode. (This week's script is credited to Jim Gray and John Shiban: did they each write half, without consulting with the other?) Now, suddenly, Jilly is positively gleeful about Oswald, literally jumping up and down with joy as Oswald takes a little girl into the same hands with which he raped and murdered a little girl. (It is far beyond my capacity for willing-suspension-of-disbelief that anyone would react to Oswald's act—which we're supposed to buy as his Sermon on the Mount—with anything other than a mob decision to kill him with fire.) 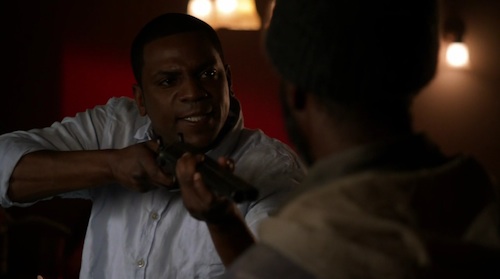 Look, I appreciate Torchwood 's willingness to show the darker sides of characters: in the first two series, Owen (Burn Gorman) was not only kind of an asshole, but he was actually introduced in the act of using alien technology to date-rape random women. But he had other sides as well, and over the course of the series we learned to care about him. Rex, on the other hand, is just a dick. That's all. Four episodes in, and there's not an ounce of anything to balance out his total dickishness. He's a dick to his dad, he's a dick to Vera, he's a dick to Esther, he's a dick to Jack and Gwen. Even in scenes that I suspect are meant to humanize him—with his father, and last week's scene with Vera—he's still just a dick. You can't even blame it on his near-death experience, because in his very first scene—before the accident—he was being a dick about some co-worker whose wife was dying. He's not even the character you love to hate: he's just the character you hate and wish would disappear, and yet he gets far more screen time than any of the characters we actually care about. 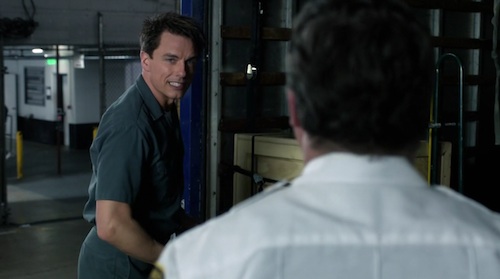 There is none. I'd love to question a new viewer—someone who has only watched Miracle Day—about what they know, or what they think, about Jack. Would they get that's he's a several-thousand-year-old alien? Would they get that he's a former con-man, a former time-agent, a former anything? More importantly, would they think that he's a hero? A leader? Would they think that he's clever, or charming, or roguish, or brave? None of this is evident from Miracle Day. (Esther this week tells Rex that he's "a better strategist than any of us," which shouldn't be true with Jack in the room, and yet—so far—probably is.) I suspect new viewers would think Jack is just the stupid muscle—though Rex is better at that too, as shown this week. Jack is the guy who picks up bartenders, whines about his mortality, and wears the UPS uniform to execute the plan that the smart people come up with. 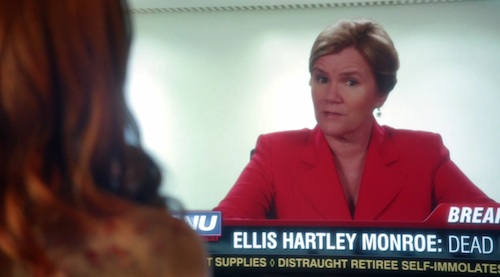 Miracle Day had such a promising premise, but it feels like Davies handed it to a writer's room full of third-graders who had absolutely no idea what to do with it. Children of Earth excelled at showing a (slightly unrealistic, but plausible) government response to a global crisis—one that believably involved government officials, high level bureaucrats, and military mobilizations. Now, in response to what would surely be a larger crisis, there is nothing. (If I hear one more character say, "The White House is silent, the Vatican is silent, scientists are silent," this show is going to be silent in my house.) A pharmaceutical company seems to be handling—badly—the breakdown of the entire medical system, while a rich housewife and a murdering pedophile are the only talking heads in sight. This entire scenario is beyond implausible: it's childishly silly. 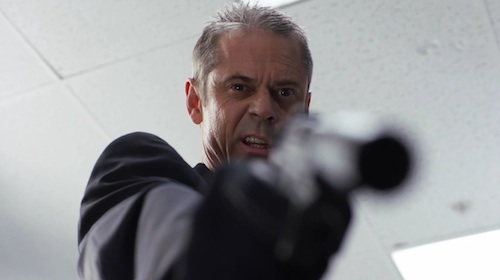 Oh Jesus, where do I start? I don't have the energy to catalog all the ways in which this story makes no fucking sense at all. Let me limit myself to the silly A-Team style break-in plot. C. Thomas Howell's cartoonish hitman—he isn't named, so let's just appropriately label him "Soul Man"—watches the team for days: why doesn't he grab them before they break into the super-secure facility? Why does he choose, instead, to gain access to the facility by cutting off the palms and retina of the guy who had official access? Why, if Soul Man is working for these mysterious Phicorp people, doesn't he have access anyway? Why do the elevators work for Jack thirty seconds before they don't work for Rex? Why—after the initial silliness with retina scans and palm prints—can everyone just walk in and out of this office at will? Why would taking a blow-torch to one server—among dozens—convince Phicorp that they had been damaged by a fire?

Look, I'm not usually this pedantic; I'm more than willing to overlook some logical missteps in this kind of show, but the sheer number of such plot-holes in Miracle Day—I didn't even come close to naming them all—just leave me feeling like no one involved in the production of this show is really paying attention. 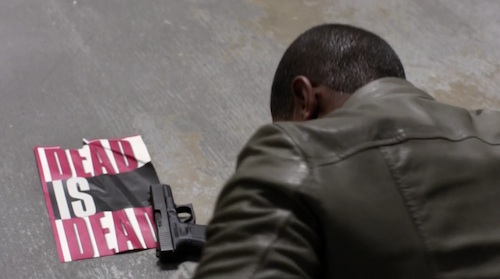 Torchwood used to have a sense of humor, both about the world and about itself. Now "humor" means jokes about driving on the wrong side of the road, and Welsh characters doing "funny" American accents.

Nor is there any sense of fun in the so-called "action" sequences: the break-in this week was startlingly unoriginal, and just as exciting as watching a sweaty guy climb 32 flights of stairs. Where's the inventiveness? Where's the alien technology that Torchwood would once have used to solve a problem? Where's something—anything—that we haven't seen a thousand times before? 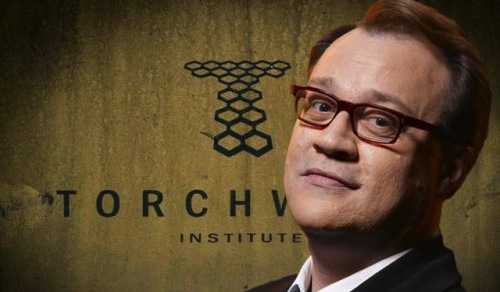 Sigh. Look, I don't know Russell T Davies—despite having read his wonderfully honest and insightful book The Writer's Tale to tatters—and it's not fair for me to try to read his mind or impugn his motives. But a few weeks ago—about two weeks before Torchwood: Miracle Day premiered—he did an interview with Mark Lawson at BBC Radio 4. Toward the end of that interview, Davies talks about his next drama, which sounds like the kind of "contemporary, domestic, gay" drama about real people that he said he wanted to return to after leaving Doctor Who in 2009. "I think it's the best thing I've written in a decade," he says. "It's back to the kitchen sinks, just people in kitchens talking." (That's exactly the kind of scene—like the one between Ianto and his sister in Children of Earth—that used to get interspersed between the sci-fi and action scenes of Torchwood, and they gave the show some emotional resonance that's sorely lacking in Miracle Day.) I think it's wonderful Davies is returning to that kind of writing, and I will eagerly await that show and watch it when it premieres. But it struck me how odd it was for Davies to speak so rapturously about his next drama, two weeks before the premiere of Miracle Day, without even bothering to pretend he thought this show might be the best thing he's ever written.

Normally, I wouldn't read too much into that, but, when I combine it with what I've seen so far of Miracle Day itself, it just leads me to believe that Davies isn't invested in Torchwood anymore—if he ever was. He doesn't appear to be staying on top of this show very closely, he doesn't appear to be bringing the character work and emotional touches of which he is more than capable, and he doesn't seem to be protecting the things that made this franchise special. It's just a theory, but I'd say his heart isn't in Torchwood anymore, and—as a result—neither is mine.