I have to be honest: I'm losing my patience with this show. There is a limit to the number of programs I can watch every week—let alone write about—and so far I'm feeling like I'd rather put my finite energies elsewhere. Unless things get better quickly, the (slowly evaporating) affection I have for Russell T Davies and the Torchwood brand isn't going to be enough to justify keeping Miracle Day in the rotation much longer.

It's not that Torchwood: Miracle Day is terrible. This week's episode, "Dead of Night" (written by Jane Espenson), was slightly better than last week's eye-roll-inducing absurdity, and found time for a couple of character moments that reminded me why I liked Jack and Gwen to begin with. (But only a couple: one of my biggest complaints about Miracle Day is that it seems to have forgotten that John Barrowman is supposed to be the star of the show. If I were a first-time viewer unfamiliar with the franchise, I suspect I'd be asking just what, exactly, this Captain Jack Harkness guy brings to the table; he hasn't shown much leadership, heroism, or humor so far, with all the action driven by the unfailingly awesome Gwen [Eve Myles] and the entirely loathable Rex [Mekhi Pfifer].) Maybe we could spend a little more time on Jack, and a little less time on lazy, time-worn gags about how Brits drive on the wrong side of the road and call potato chips "crisps." 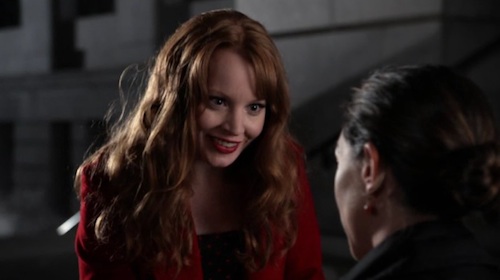 The larger problem with Torchwood: Miracle Day is that it's incredibly boring. We're three episodes in, and virtually nothing has happened so far: this week, the only thing that moves the plot forward at all is the discovery that Phicorp—an apparently omnipotent pharmaceutical conglomerate—knew about the "miracle" long before it happened, and seems to be positioning itself to take over the drug market, and perhaps the world. Their scarlet woman, Jilly Kitzinger (Lauren Ambrose), has recruited both Oswald Danes (Bill Pullman) and Dr. Vera Juarez (Arlene Tur) to be spokespeople for Phicorp's new "drugs for everyone" plan,  and we must assume that Phicorp is behind the CIA attempt to destroy Torchwood.

Which is not to say a story about an evil pharmaceutical company couldn't be interesting—after all, Series Three of Torchwood made British cabinet meetings suspenseful—but the plot development of this entire episode could have been accomplished in a couple of lines of dialogue. (Gwen, sitting at computer: "Hey, Jack, it looks like this company Phicorp has been stockpiling drugs for more than a year! It's like they knew what was going to happen." There, Russell, I just saved you 50 minutes of screen-time to spend on something more entertaining.)

The ramifications of the miracle itself continue to be the most intriguing part of Miracle Day, but even those are becoming less and less exciting. It's interesting to hear that miscarriages are now a thing of the past, and that the judicial system is struggling to deal with what "attempted murder" means in a world where no one dies, but by now I feel like we should be seeing some larger fallout from the fact that death is on permanent hiatus. Surely this development would result in more global upheaval and spiritual crises than we've seen so far? There are a few nods to this in "Dead of Night"—a television preacher discusses the religious implications, and a new cult called the "Soulless" takes to the streets en masse wearing creepy frowny-face masks—but for the most part it seems to be business as usual on planet earth. (Even the "Soulless" seem to exist less to explore the philosophical implications of a world without death, and more to provide an ominous, V for Vendetta style visual.) 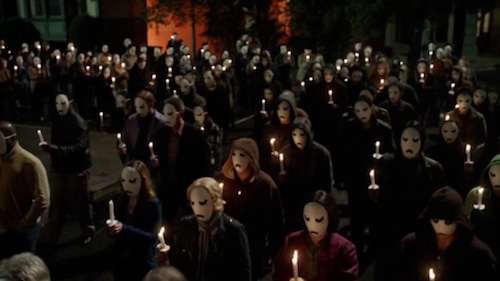 Three episodes in, I'm still asking: what is the point of all of this? What makes this story worth telling? In the beginning I was willing to give Miracle Day the benefit of the doubt, since the basic set-up seemed to promise something fascinating; so far, however, the show has not delivered on the potential of its own premise. We have far too much 24-style running around—most of it unnecessary and unexciting—and far too little exploration of what would surely constitute the most important, life-changing development in the history of the human race. A thoughtful extrapolation of this premise would more than make up for the lack of fun in the rest of the series, but Miracle Day is treating global immortality like it's no more consequential than a bird-flu epidemic. ("The White House has said nothing, scientists have said nothing." Really?) 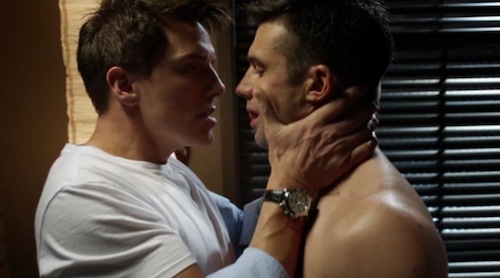 Nor, unfortunately, are we getting the character work that would make us care, though there are hints this episode that what Davies and team are moving towards is a thematic tie-in with Jack's own immortality. In "Dead of Night" we see Jack going through a mid-ever-lasting-life crisis of sorts, as his newly imposed mortal state inspires him to pick up a bartender (Dillon Casey) for a one-night stand. (I've always been a fan of the show's refreshing willingness to feature homosexual scenes with the same straightforwardness as any other show would feature heterosexuality, but it seems to serve little purpose here.) His newly-mortal panic also leads Jack to drunk-dial Gwen (Eve Myles), and needily express his love for her.  (I've not been a fan of the show's flirtation with a Jack/Gwen pairing, and I like the fact that she drops the phone halfway through Jack's pathetic wheedle to talk to her husband and baby.) 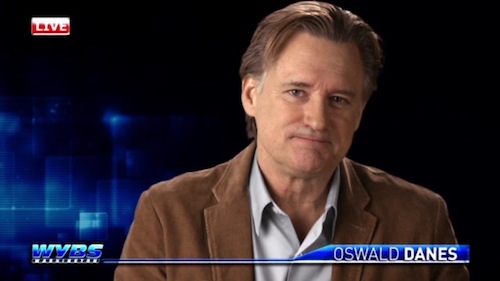 And then, in the final scene, Jack confronts Oswald Danes, who is on a totally unbelievable track to transition from despised child rapist to global messiah. (The show wants it both ways: strangers and cops want to beat Oswald up, but millions apparently want to touch the hem of his garments.)  We are clearly supposed to draw parallels between Danes and Jack: Jack, of course, was forced to kill his own grandson in the final episode of the previous series, and therefore doesn't believe Danes's claims that he feels "forgiven for taking the life of a child." But this scene doesn't work: the speech Danes gives about how raping and murdering a little girl was the best moment of his life is desperately over-written and phony, and any implied parallel between Danes (who killed to get his rocks off) and Jack (who killed to save the world) is ridiculously overreaching for thematic integrity.

Overall, I'm now officially concerned that the entire series is working its way towards nothing more profound than some ham-fisted point about how death gives meaning to life, with an implication that Jack's previous immortality robbed him of some precious humanity. Yes, we get it: to quote one of those death-obsessed poets Gwen says are the real victims of the miracle, "death is the mother of beauty." But if that, and the fact that pharmaceutical companies are evil, are the only takeaways from Torchwood: Miracle Day, this will have been a missed opportunity on a grand, bi-continental scale.

There is still time to turn this around, and I have my fingers crossed, but so far Miracle Day seems a bit lifeless, far too joyless, and more than a little—if you'll pardon the pun—soulless.