I'm writing this review a little later than I normally would—sometimes real life gets in the way of more important things—but it may turn out for the best. I've had a little more time to think about "The Pointy End" than I'd otherwise have taken, and my opinion has changed slightly.

My first reaction was that this episode—written by the man himself, George R. R. Martin—was the weakest of the series thus far. (Not bad, mind you, just slightly weaker.) "The Pointy End" suffers slightly from a lack of cohesion; if you've read my previous reviews, you know I usually try to find the overall theme that helps tie each installment together and gives a stronger sense of what the episode is actually about. While there is a general theme of "mercy" running throughout "The Pointy End," it doesn't hold together as well as others, and my initial thought was that Martin had perhaps failed to make his episode quite episode-shaped. (I'm not reading ahead in the novels, but I've read enough of the early chapters to know that Game of Thrones writers—while very faithful—often move events around and add additional scenes to give each episode a more cohesive structure.)

And while I still think this is true—and though I enjoyed this episode less than some others—I've now had a chance to think about it, and I've realized that it's appropriate that this episode is a little chaotic, a little disjointed. It should be: the Seven Kingdoms of Westeros have been shattered. King Robert—who held the realm together, however clumsily—is dead, and Ned (Sean Bean)—our moral compass—has been imprisoned. The Stark and Lannister houses are at war, and new threats are gathering from the North (the White Walkers) and the East (the Dothraki). The slender threads that held this world together have all snapped, and Westeros is quickly falling back into chaos.

"The madness of mercy." —Eddard Stark 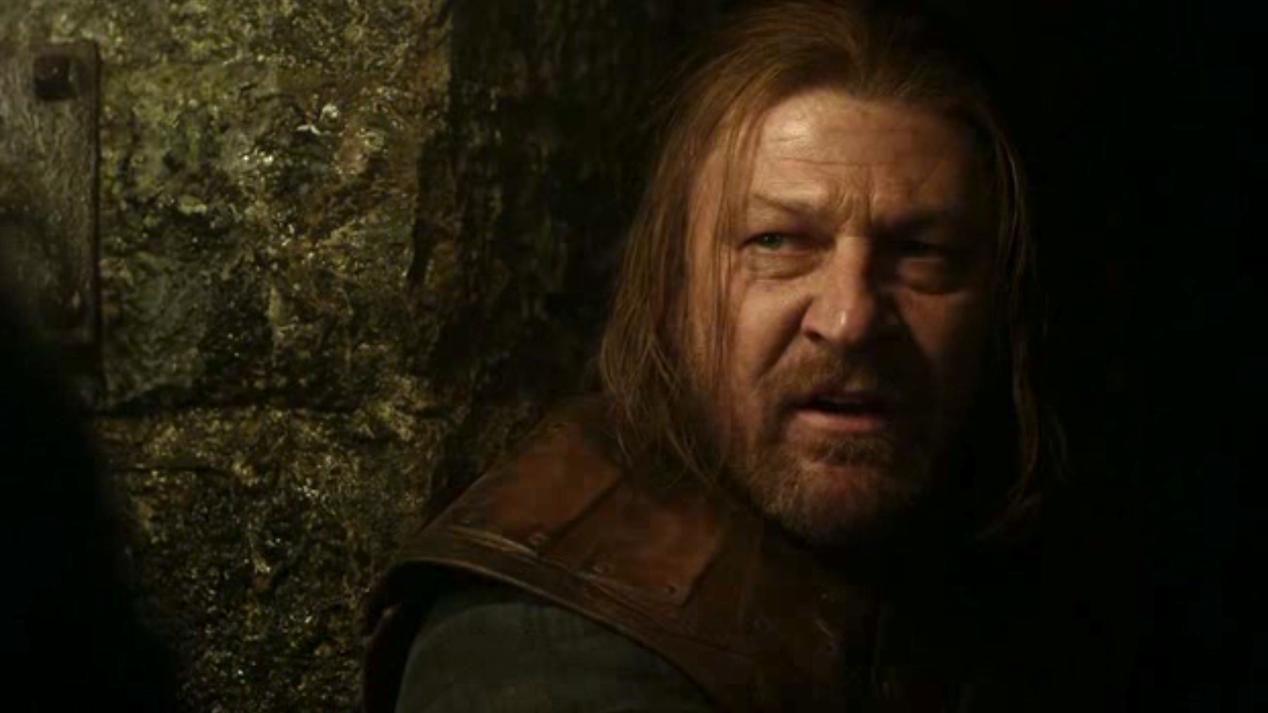 Ned was the Hand of the King—the symbol and implementor of King Robert's law—and he has been thrown in the dungeon and charged with treason following his betrayal by Littlefinger (Aiden Gillen) last episode. Literally and figuratively, Robert's rule is over, and the fragile peace he maintained has been broken. (Even the unimpugnable Ser Barristan [Ian McElhinney] has been stripped of his duties.) As Varys (Conleth Kill) says, however, Ned's real crime was mercy: Ned tried to spare Cersei's children, and thus gave the Queen enough warning to stage her coup. "It was your mercy that killed the King," he tells Ned, before breaking the news that Catelyn no longer holds Tyrion Lannister (Peter Dinklage) for leverage. "I trust you know you're a dead man," he says, and I fear he might be right.

Certainly there does not seem to be a lot of mercy on offer from the Lannisters, who slaughter Ned's household staff throughout the halls of King's Landing. This includes, presumably, Septa Mordane (Susan Brown)—the color of whose hair, alas, must now forever remain a mystery—and Syrio Forel (Miltos Yorolemou), who appears to sacrifice himself defending Arya (Maisie Williams) with a wooden sword. Syrio's last lesson to Arya is about seeing, however—about trusting your eyes, not what you hear—and so it would not surprise me to see the First Sword of Braavos turn up again. 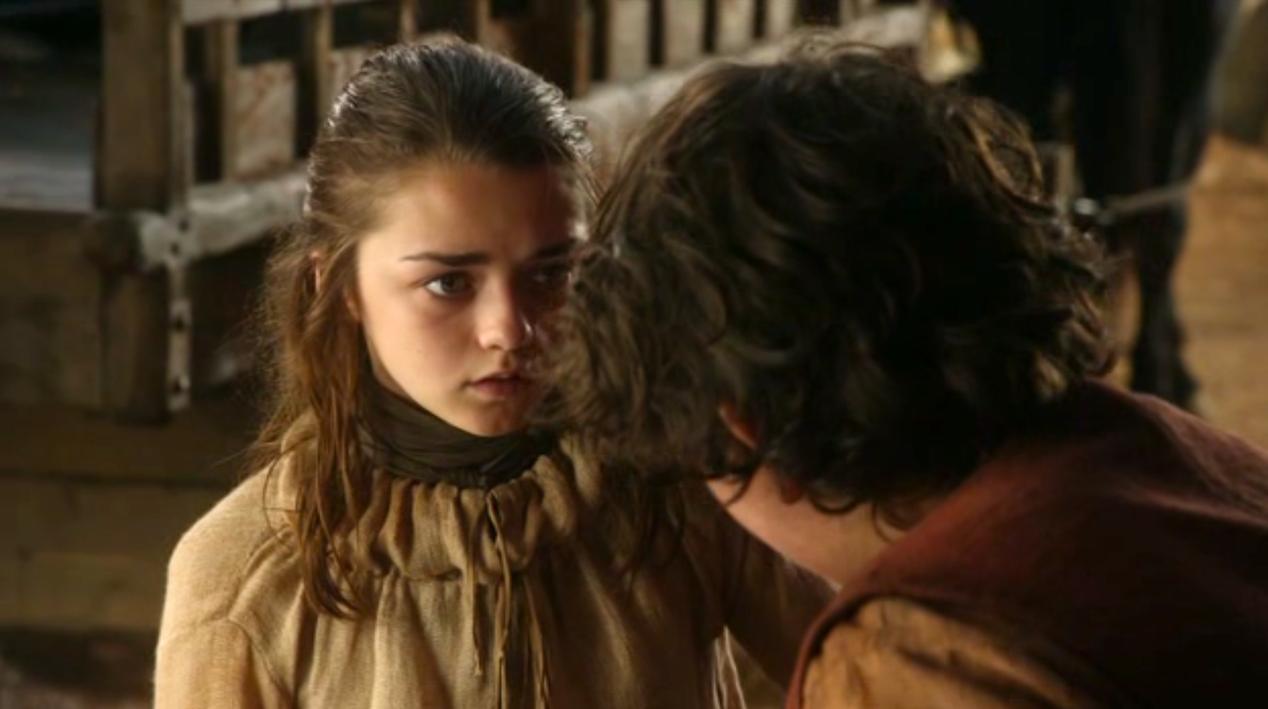 Meanwhile Arya makes good her escape—no fool she, since I doubt the new King would be particularly inclined towards mercy where she is concerned. She also has her first taste of real swordplay, as she (accidentally?) slips Needle through a repulsive stable boy who tries to collar her for the Queen. I doubt it's as much fun as she hoped it would be, but kids have to grow up fast in Westeros. Besides, she is only following the first thing she ever learned about sword fighting— "Stick 'em with the pointy end"—and adhering to the most important teaching of her mentor, who reinforces it with his last words: "What do we say to the god of death?" Not today.

"Though I would treasure your friendship, I'm mainly interested in your facility with murder." —Tyrion Lannister 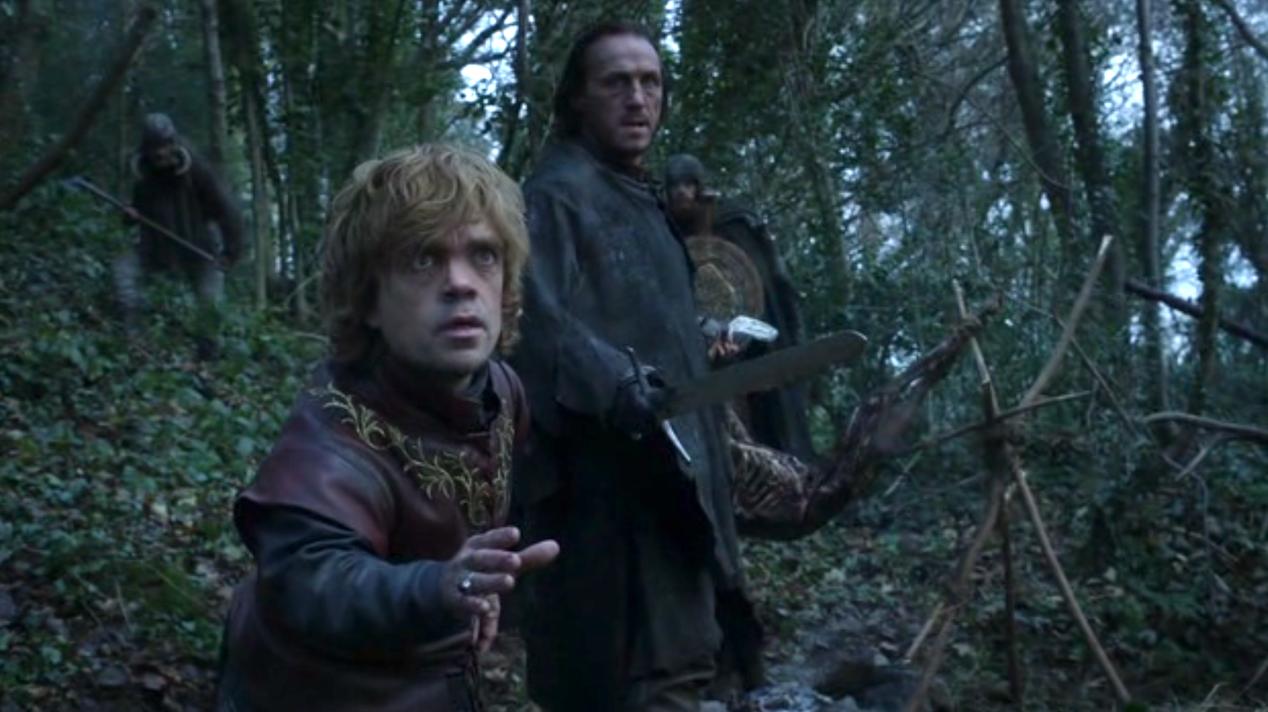 I had a conversation with someone recently in which I postulated that one can get away with anything as long as one is funny. I came back to that thought during this episode, as I wondered whether Lord Tyrion would survive as well without Lannister gold backing him up. But Tyrion is funny, and that—as much as bribery, which he also employs liberally—is how he tells death "not today" on a daily basis. Bronn (Jerome Flynn) is with him for the money, certainly, but really the two first bonded while exchanging wisecracks on the Eastern Road: it is doubtful Bronn would have volunteered to champion Tyrion at the Eyrie if he didn't also like him. (Bronn has a fairly dry sense of humor himself, as we've seen: after enduring a tortuous round of "X-son-of-Y" introductions, he simply tells Tywin he is "Bronn, son of…you wouldn't know him.")

Similarly, the Capital One-rejects they encounter from the hill tribes want weapons in exchange for mercy, but Tyrion breaks the ice by being funny. (Asked how he would like to die, Tyrion suggests "In my own bed, at the age of 80, with a belly full of wine and a girl's mouth around my cock.")  We'll see next week how funny Tyrion is riding into battle against the Starks—though what would be really funny is if he turned out to be good at it.

"I do not have a gentle heart, sir." —Daenerys Targaryan 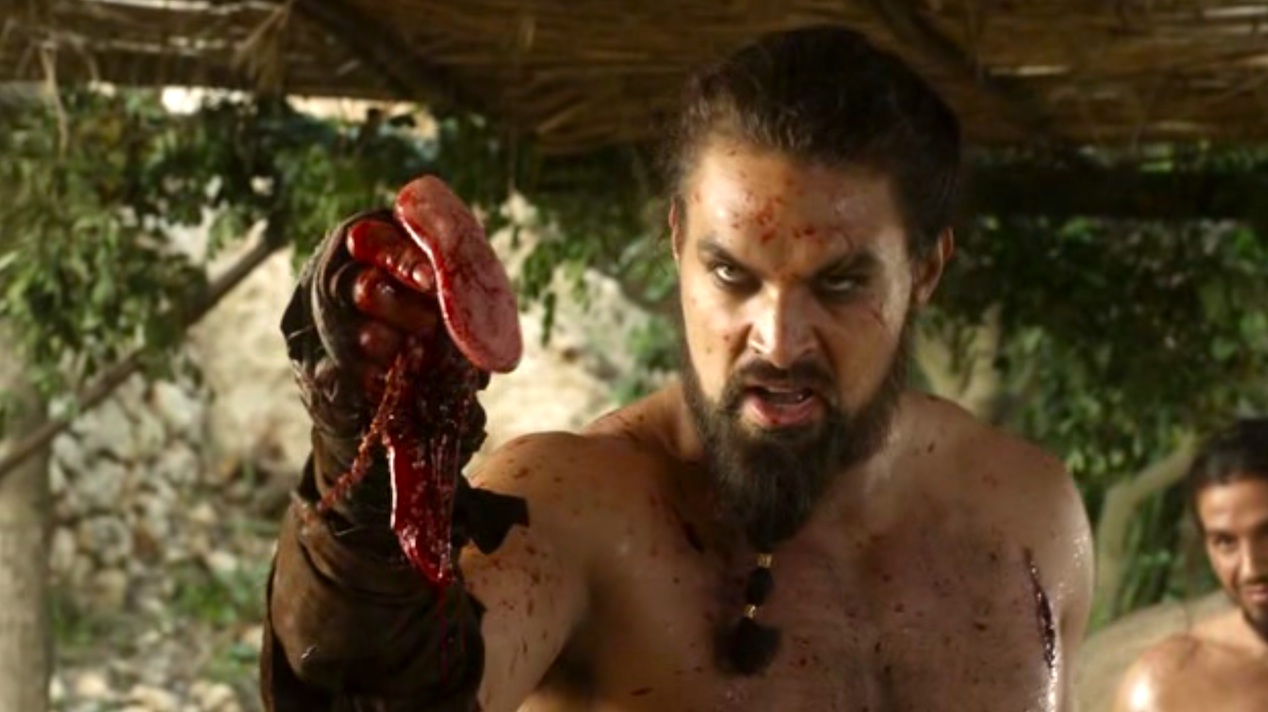 Dany (Emilia Clarke), meanwhile, is bringing the concept of mercy to the Dothraki—at least as far as the women are concerned. During a Dothraki raiding party, she intervenes in their time-honored tradition of raping the women of the conquered tribe, and persuades Khal Drogo (Jason Momoa) to not only end the practice, but also to accept the nursing of a Lamb Tribe priestess. It will be interesting to see if she has more luck with mercy here than Ned did in Westeros—or if this, too, will end up tearing apart the fragile allegiances that hold this kingdom together. (Drogo is already forced to fend off a challenge from another Khal, who basically accuses him of being pussy-whipped. Why anyone thinks it's a good idea to insult this guy's wife is a mystery—were you not there for the Golden Crown bit? Or the attempted poisoning?—but Drogo quickly teaches him that he hasn't quite embraced this whole mercy thing. Khal Gandhi he ain't.)

"My father understands mercy, when there is room for it." —Robb Stark 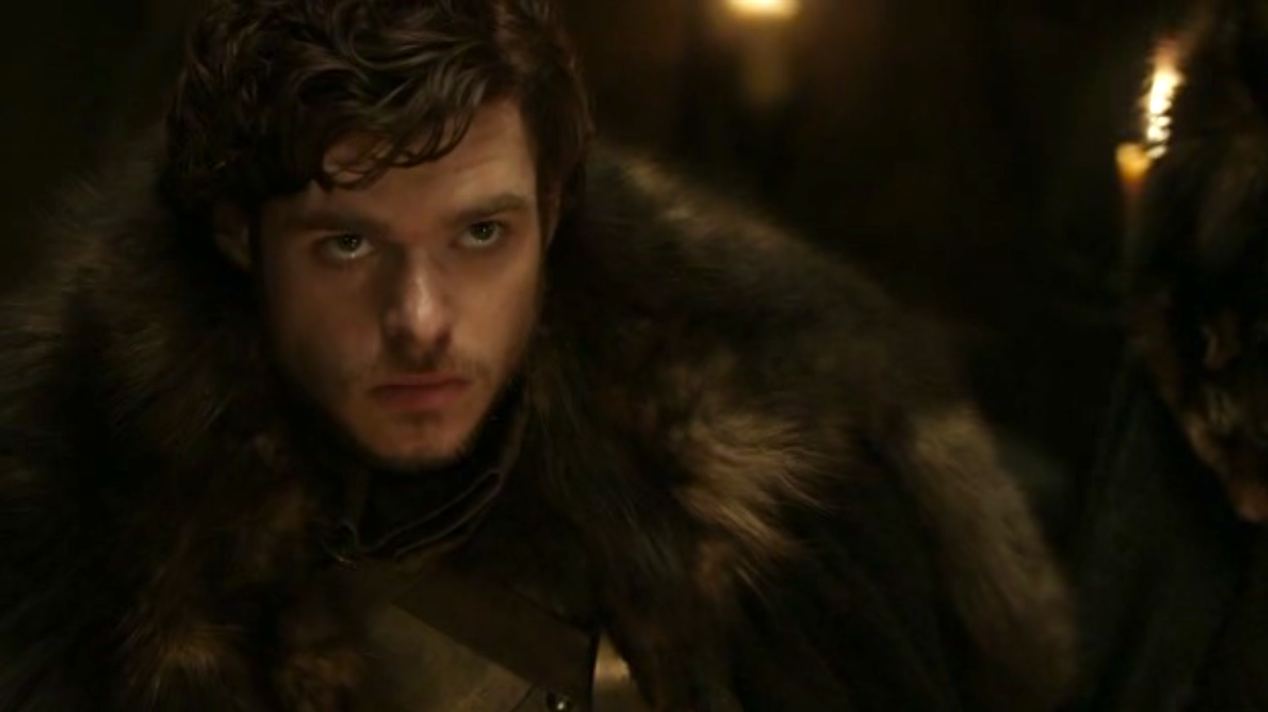 With Ned incarcerated, Robb Stark (Richard Madden) is Lord of Winterfell. But is he too much his father's son? Robb finds himself leading an army of cantankerous Stark banner-men against Jaime and Tywin Lannister, but he is still very much a boy, as his mother (Michelle Fairley) reminds him: "I remember the day you came into this world, red-faced and squalling. And now I find you leading a host to war." (Don't you just hate it when your mom shows up on the battlefield and embarrasses you in front of your horde?) Lady Stark also reminds him that Tywin Lannister ordered the Targaryan children slaughtered in their sleep, and that the years have not made the Lion more merciful. In other words, everyone Robb loves will die bloody unless he's successful in his first military campaign. (No pressure, though.)

Fortunately, Robb has some fierce new allies on his side, including Greatjon Umber (Clive Mantle), who seems to think getting several of his fingers bitten off by Robb's dire wolf is not only a hilarious experience but also a bonding one. And Tyrion seems to think Tywin and Jaime are underestimating the young Lord Stark. ("He's belligerent—you'd like him," Tyrion tells his father.) But is Robb making all his father's mistakes again? When a Lannister spy is captured, Robb releases him, over the objections of Lady Stark and the gathered warlords. It is unclear to me at this point whether this is weakness or strategy on Robb's part: the boy does seem to have over-estimated the size of Robb's forces, which could come in handy. And Robb does send him back with a warning: "Tell Lord Tywin: winter is coming for him."

"All I ask is mercy." —Sansa Stark 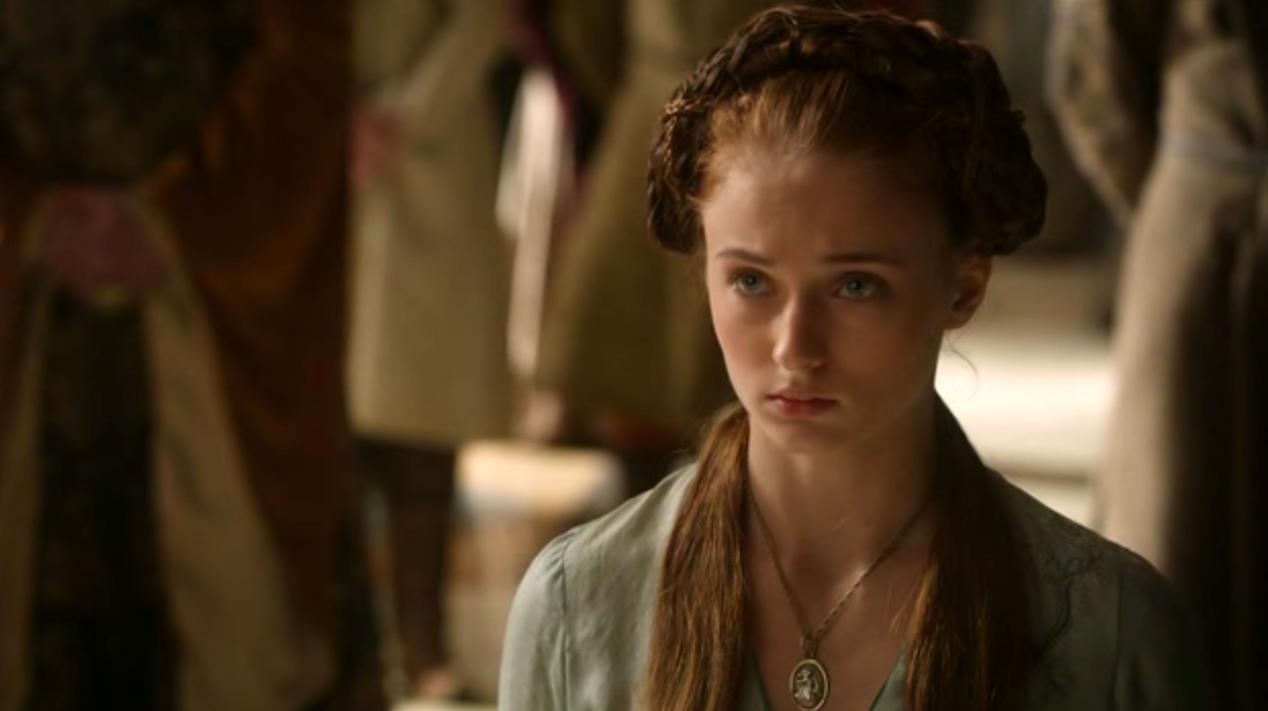 Poor Sansa. Could she be any stupider?