The word "justice" gets thrown around a lot on "A Golden Crown," and it led me to think a little about the Iron Throne itself. The most iconic image in Game of Thrones—and its symbolic MacGuffin—the throne is forged from the weapons of warfare that have been transformed into a (literal and figurative) seat of governance. It is the place where the King's Justice is dispensed, the place where words settle conflicts that would previously have been decided only through war. Like Arthur's round table, it represents progress towards order from the chaos of feudal anarchy, the first tentative steps towards what we would think of as a just civilization.

Like all symbols, however, the throne only has power because everyone agrees that it does. The government of the Seven Kingdoms of Westeros is not a democracy—no one elected King Robert (Mark Addy)—but it exists by consensus; everyone understands how tentative the peace is, how easily any one faction could drive the land back into chaos and tyranny.

(This is especially true because many of the leaders—and perhaps none more than the King—openly long for the good old days of open warfare.) The discord is in the name: it is not one kingdom, but seven, bound by fragile alliances and grudging allegiances. The Iron Throne, like the Seven Kingdoms, was forged from war, and—since it looks to be a goddamned uncomfortable piece of furniture—symbolizes how uneasily justice rules over this brutal land.

"A Golden Crown" is all about justice; it's filled with characters—from Ned to Sansa to Tyrion to Viserys—all protesting, It's not fair! But justice, as we see this week, is very much a work-in-progress in Game of Thrones.

"I cannot give you back your homes, or restore your dead to life, but perhaps I can give you justice in the name of the King." — Eddard Stark 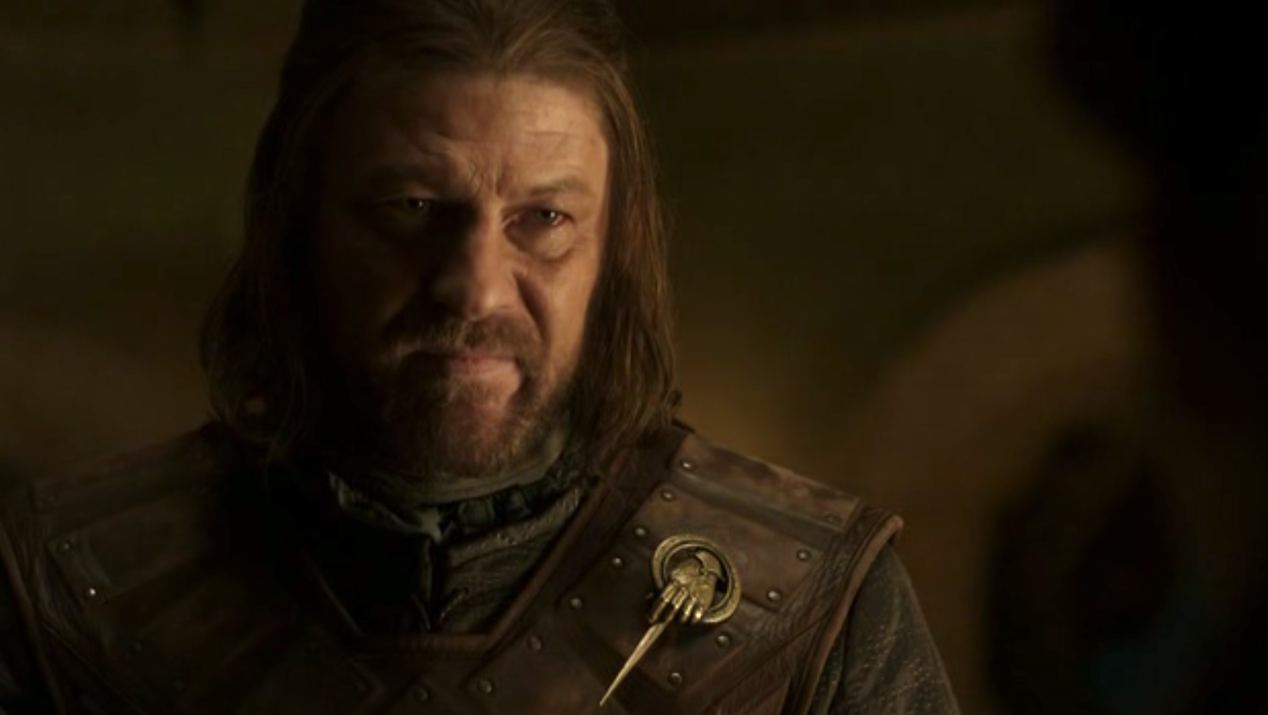 Ned (Sean Bean), for example, wants Jaime Lannister to answer for his crimes—including the slaughtering of Jory and the rest of Ned's men last week—but Robert argues that this is one of those times when justice and peace are mutually exclusive. "I'm half a kingdom in debt to his bloody father," Robert says of Jaime. "This is what matters. I can't rule the kingdom if the Starks and the Lannisters are at each others' throats." He pleads with Ned to accept imperfect justice (in regards to the Lannisters, and in regards to Daenerys Targaryan, whom Robert still plans to have killed), while in the same breath ordering Ned to put on the badge of the King's Hand, symbol of "the King's Justice."

Robert runs off to kill things in the woods (and drunkenly lament the passing of the good old days), while Ned puts on the badge and sits the Iron Throne. But when that throne is petitioned by villagers who have been ravaged by raiding parties—led by the Lannisters' lackey, Ser Gregor Clegane (the Mountain)—Ned proves that he is no fan of imperfect justice. In the name of the absent king, Ned not only puts a bounty on the Mountain's head, he also issues a summons to Tywin Lannister to answer for these crimes or be branded a traitor to the crown. ("A bold move, and admirable," Littlefinger [Aiden Gillen] says. Translation: Damn, you're in deep shit now, buddy.)

"Where is the King's Justice?" — Tyrion Lannister 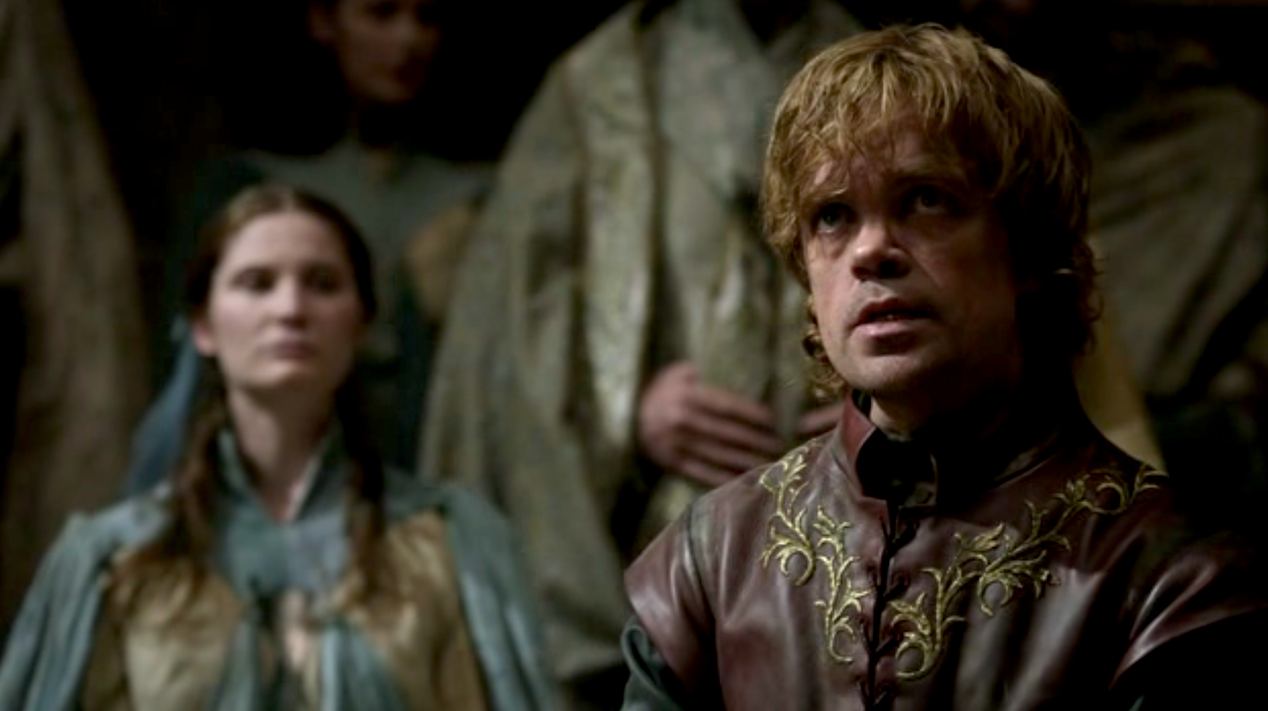 Meanwhile Tyrion (Peter Dinklage), brought to supposed "justice" at the Aerie, is working the legal system for himself. He bribes Mord (Ciaran Birmingham) to take him out of his terrifying sky cell, and is brought before Lysa (Katie Dickie) under the pretense of confessing his "crimes." ("When I was twelve I milked my eel into a pot of turtle stew," he testifies. "I flogged the one-eyed snake, I skinned my sausage, I made the bald man
cry." But of Jon Arynn's murder, and the attempt on the life of Bran Stark? "I don't know anything about all that," Tyrion says, apologetically—and just like that Dinklage has yet another wonderful highlight reel to submit to the Emmy voters.)

Before the gathered court of the Vale, however, Tyrion calls for the King's Justice, invoking his right to trial. He understandably balks at a trial overseen by Lysa's son—a giggling, milk-drunk monstrosity eager to see "the bad man fly"—and instead chooses trial by combat, finding an unlikely champion in Bronn (Jerome Flynn), one of Catelyn's hired guns.  Here we get another example of how the doctrine of "fairness" conflicts with practicality and necessity: Bronn fights dirty, and ends up sending Lysa's chivalric champion to a free-falling grave. "You don't fight with honor," Lysa complains. "No," Bronn admits, gesturing towards the dead champion. "He did." 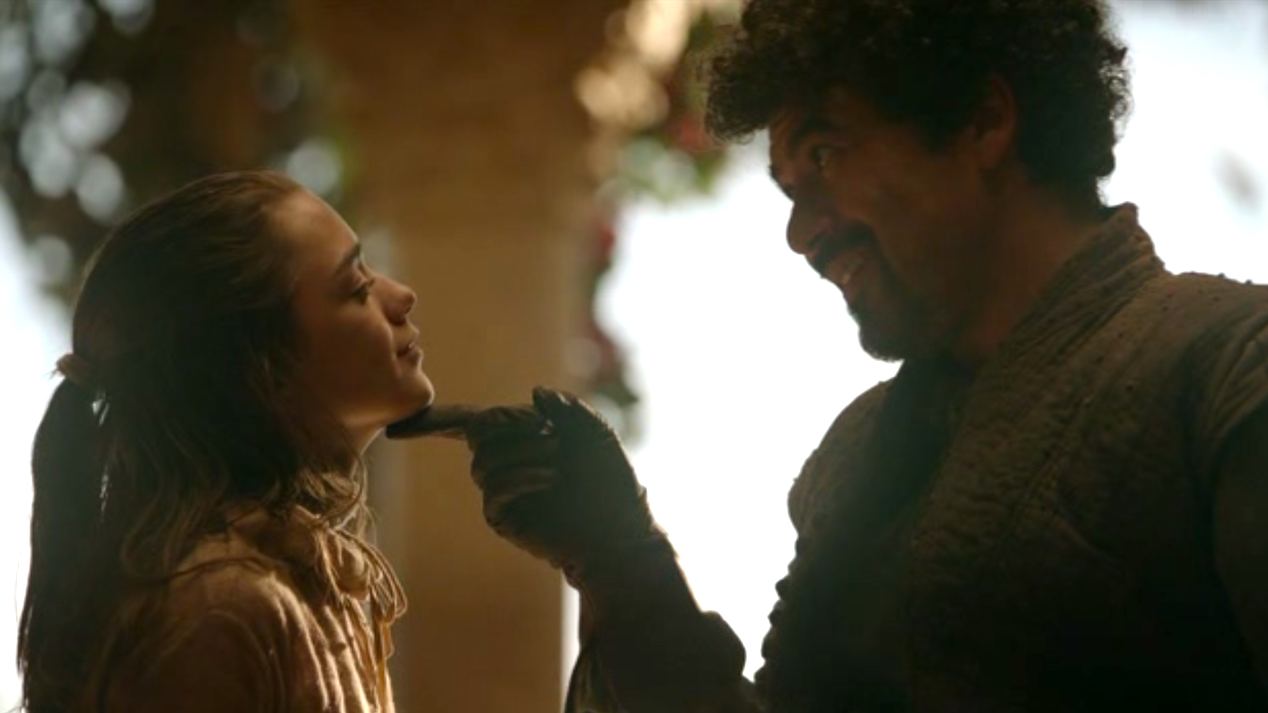 The whole notion of a trial by combat is predicated on faith: the certainty that the gods will favor the righteous. It is rooted in the belief that there is an order to the universe, and that the world is inherently just. But Bronn demonstrates—as Robert argues, in his own way—that the world doesn't really work that way: the concepts of fairness, justice, and honor may just be human conceits, subject to the demands of survival, giving way to the needs and desires and abilities of men. (I was reminded of an old joke, which is repeated in Woody Allen's Crimes and Misdemeanors, a film that deals with the absence of divine justice: a priest is asked to pray for a boxer before a big match. "I'll pray for him," the priest says. "But if he can punch it will help.")

It's a philosophy reiterated, in slightly different terms, by Ayra's fencing instructor Syrio Forel (Miltos Yeromelou). The (unfailingly awesome) Arya (Maisie Williams) doesn't want to train today, because she's sad about Jory and worried about her father. Syrio, however, tells her that such concerns have no place in combat, and neither does prayer. A practical girl herself, Arya says she prays to both the new gods and the old, but Syrio assures her there is just one god: "And his name is Death. And there is only one thing we say to Death: Not today." Sometimes there is no honor, no morality, no justice: there is just the choice to survive. It's a lesson she takes to heart, accepting much more easily than her sister that Ned is sending them back to Winterfell for their own safety. "It's not fair," whines Sansa, who has done everything expected of her. But Arya—whose gender precludes her from living the life she wants—has long ago learned that life isn't fair, and is adapting to that lesson every day.

"You shall have a golden crown that men shall tremble to behold."—Daenerys Targaryan 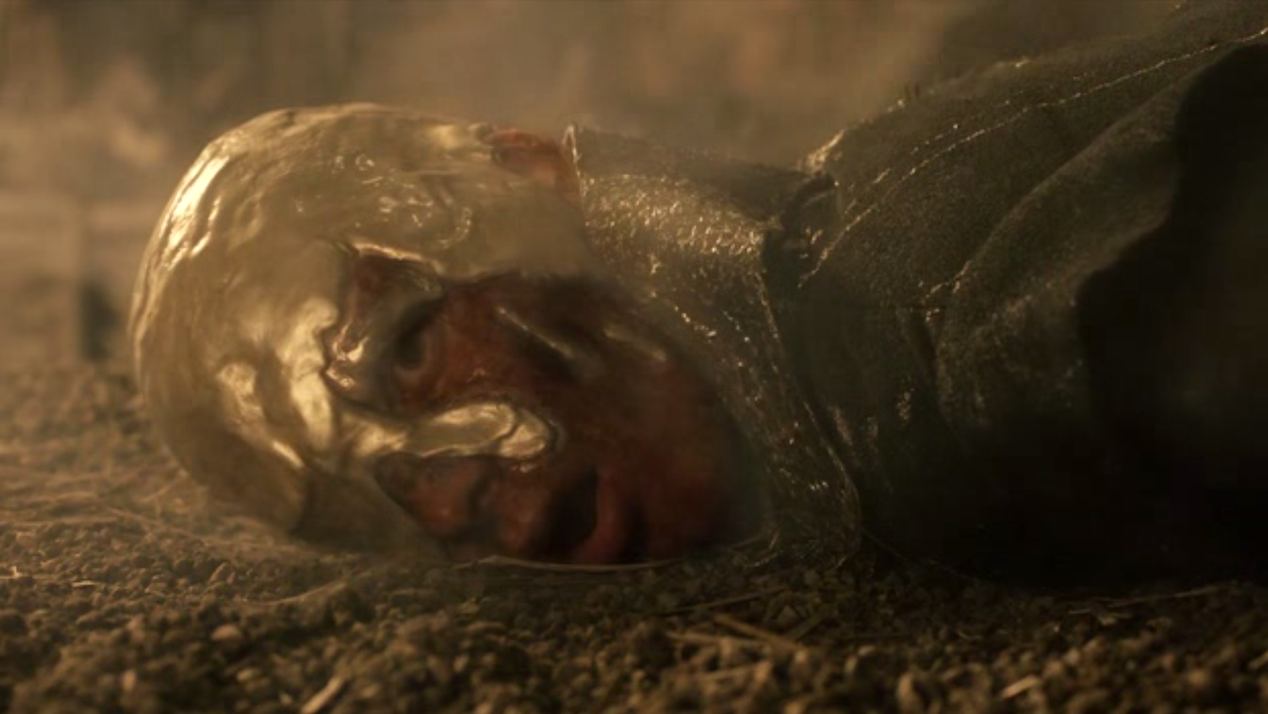 It's a lesson poor Viserys Targaryan (Harry Lloyd) learns far too late. He's been very patient: he sold his sister to Khal Drogo (Jason Momoa) in exchange for an army to win back the crown he thinks is his destiny, and he has spent months waiting for Drogo to make good on the exchange. And, while he has waited to be King—with decreasing hope—he has had to watch Dany (Emilia Clarke) truly become a queen. His breaking point arrives this episode, as he sees the adoration the Dothraki people have for Dany, and hears their prophecy that her child will conquer the world. "I'm the last hope for the dynasty," he bitterly tells Ser Jorah (Iain Glen). "The greatest dynasty the world has ever seen, on my shoulders, since I was five years old. And no one has ever given me what they gave to her in that tent. Never. Not a piece of it."

(Translation: It's not fair.)

And the thing is, he's right. They made a bargain. It isn't fair. But fair is not how the world works, and his sense of injustice pushes him too far: he drunkenly threatens Dany with a sword, and demands the crown he was promised. (Hint: threatening the queen of a warrior tribe, who is not only beloved but also carrying a child of prophecy, is probably not a good idea: Robert should take note.) Dany looks at him with great pity, which slowly changes into steely resolve: she is no longer the sister he pawned, the little girl he abused; she is Khaleesi of the Dothraki, and she warned him two episodes ago that the next time he raised a hand to her would be the last.

Drogo speaks, and Dany translates in perfect agreement: "He says yes. You shall have a golden crown that men will tremble to behold." It's to Lloyd's credit that he evokes pity with a moment of heartbreaking humanity: Viserys smiles meekly, pleased with himself, and says, "Well, that was all I wanted. What was promised." And then Drogo's men seize him, and Drogo melts a cauldron of molten gold and gives the Dragon his golden crown.