Of all the shows on television that could feature a guy getting a knife through the eyeball, a bludgeoning dwarf, a breast-feeding 7-year-old, a spontaneous equine decapitation, and a discussion of the economics of cadaver fucking—all in the same episode—Game of Thrones has definitely become my favorite. The title of this episode refers to the two central houses—Stark and Lannister, respectively—that have been moving towards open hostility since Game of Thrones began. "The Wolf and the Lion will soon be at each other's throats," says Varys, the Spider (Conleth Hill), and by the end of this episode—the bloodiest of the season so far—he's right. "The Wolf and the Lion" isn't quite as thematically tight as last week's episode, but it makes up for it with sheer story acceleration, finally setting a match to much of the narrative kindling that's been piling up around Game of Thrones.

Or—to throw another metaphor into the mix—shit, meet fan.

But the title also emphasizes the theme of dichotomies that is central to this episode. There are some interesting parallels at work in "The Wolf and the Lion," some comparing-and-contrasting that helps bring certain characters into stark relief, and which serves to make clearer the issues at stake in Game of Thrones. An early scene picks up the dichotic theme from the episode's title, as the two Clegane brothers, the Mountain (Conan Stevens) and the Hound (Rory McCann), pair off against one another during the tournament. The brothers have certainly appeared equally terrifying and monstrous before now, but here a sharp contrast is drawn between them. Gregor, the Mountain, is all uncontrolled wrath and homicidal impulse, beheading his own horse in frustration and attempting to do the same to the Knight of Flowers (Finn Jones). While everyone else stands and watches—either in shock or in titillation—it is Sandor, the Hound, who leaps into the fray to stop his brother.  The Hound—who bears the terrible scars of his brother's rage—is every bit as formidable, but here we see he is less emotional, more reasoned, more conscious of duty. (Watch how the Hound drops to his knees in obedience the second the King commands them to stop fighting, even though his brother is still swinging his sword in rage.) 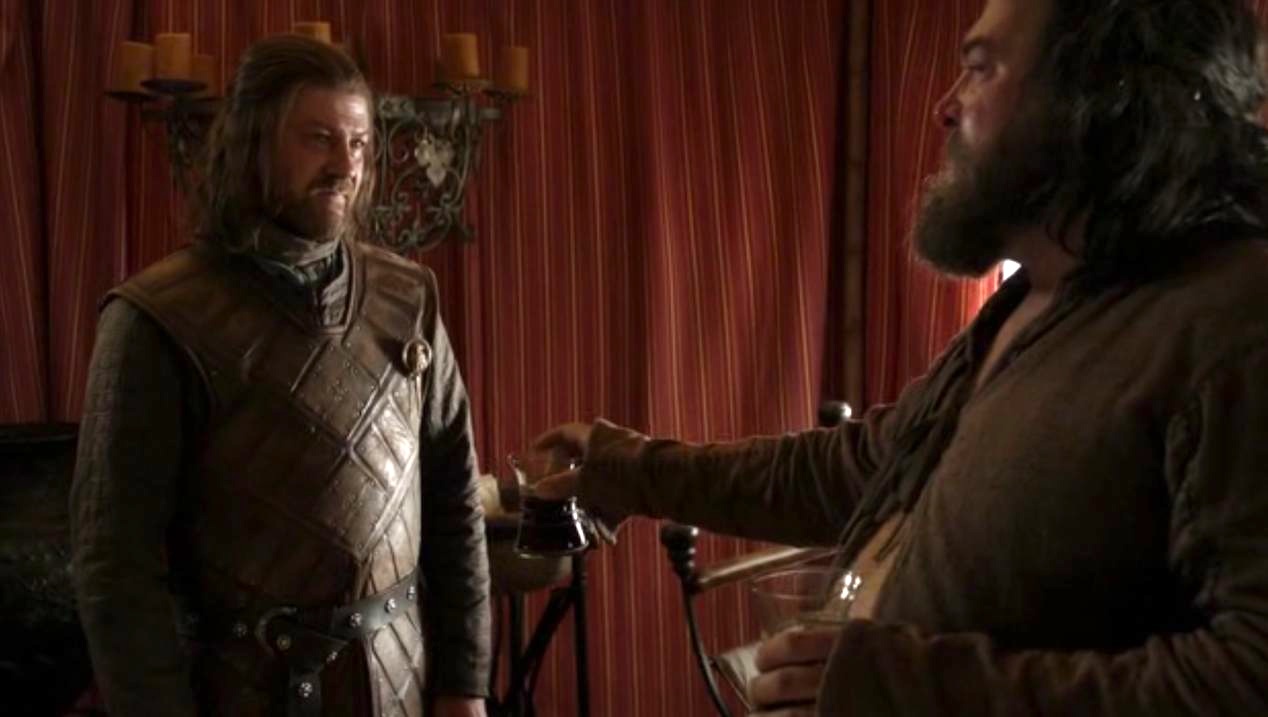 This relationship directly parallels that between Robert (Mark Addy) and Ned (Sean Bean), who are as close to being brothers as two men can be. Robert is all emotion and id, desperately wanting to "hit somebody," given to whoring and spending and abusing his servants. Ned—who also bears the scars of Robert's wars—is his friend's conscience, brought in as Hand of the King to temper Robert's wilder and more impulsive side. Sometimes it works—as when Ned dissuades the King from taking part in the joust—but he cannot persuade the King that murdering the pregnant Dany is not a justifiable act in the name of  homeland security. "I thought you were a better man," he tells the King, and— just a few episodes after accepting the job of King's Hand—he turns in his badge. 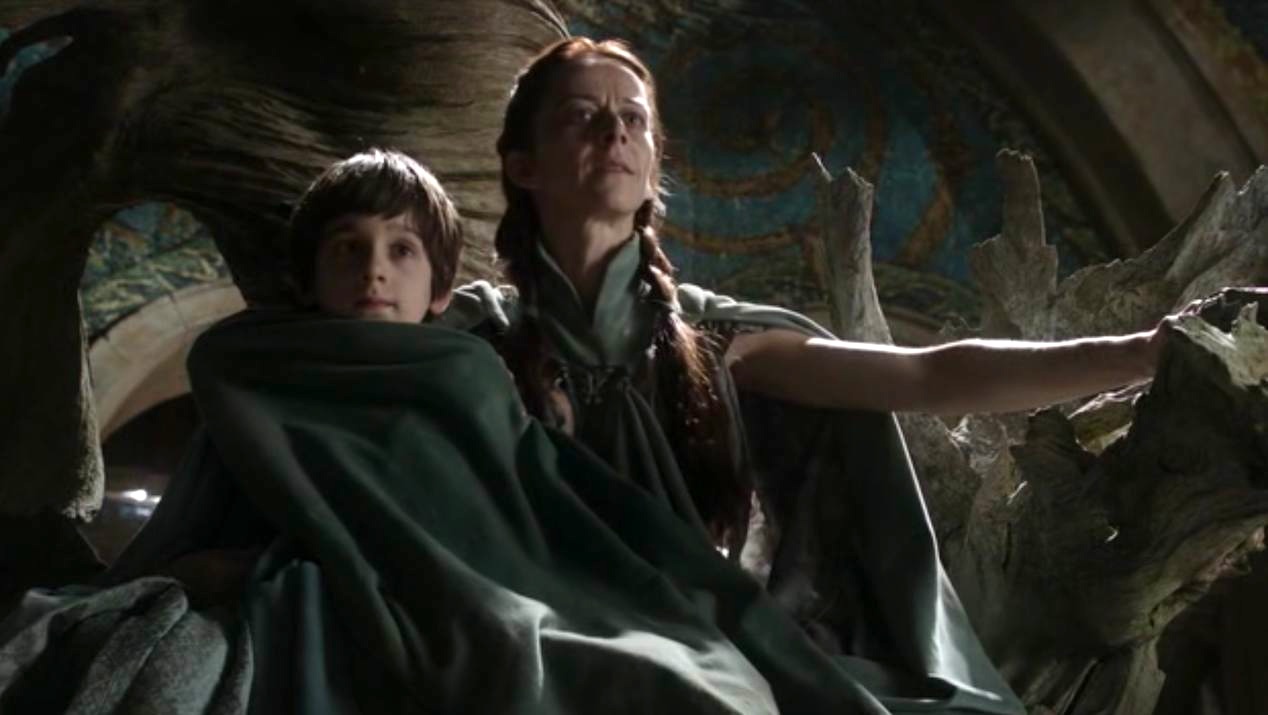 Really? You mean she wasn't batshit crazy before? Lysa gets a memorable and disturbing introduction, imperiously granting audience to her "guests" from atop a ridiculously high throne while casually breastfeeding her son Robin (Leno Facioli), who looks to be about 7 years old. Lysa is a warped, funhouse-mirror reflection of Catelyn, a slightly twisted re-interpretation of Catelyn's strength, and a perversion of the Tully House motto: "Family, Duty, Honor." Catelyn refused to leave her injured son's bedside, but Lysa refuses to let her son leave her breast; Lady Stark arrested the Imp, but Lady Arynn has him thrown in a terrifying cell with an open-air view of the sheer walls of The Eyrie, and seems to be entertaining her wet-chinned son's desire "to see the bad man fly."

(Okay, I'm just going to say this once: all this in-breeding is not good for the gene pool. You all are producing some fucked-up children. I mean, seriously.) 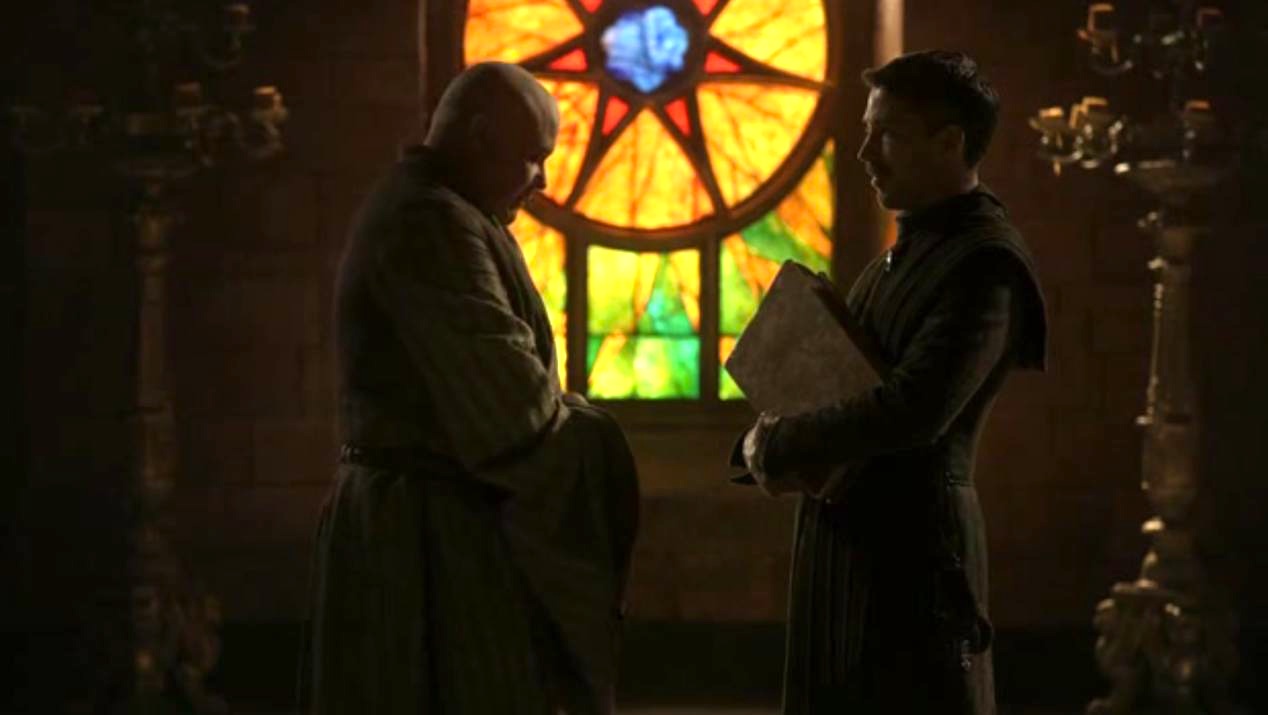 There are other meetings between shadow-selves throughout "The Wolf and the Lion." It's a very fine line, for example, that separates Baelish (Aiden Gillen) and Varys—they are both master manipulators and opportunists, in addition to being sexually predatory slimebags—but Varys seems to be playing every side in an effort to bring about a war, while Baelish—so far—seems to be weaseling on the side of good. The two square off for an exchange of venom in the throne room, before the same windows where Ned and Robert will have their confrontation, and there is a sense that Baelish and Varys may be the real rulers of this realm, the quiet, more effective shadows of Ned and Robert. They are the chess players, and Robert and Ned may just be pieces on the board. (This echoes Robert's comment to his wife that the realm has become "backstabbing and scheming and arse-licking and money-grubbing." The warriors may be out of date—relics of a simpler time—and the politicians may inherit the world.)

Robert and Cersei (Lena Headey) have what may be the first real conversation they've had with one another in years. Their talk begins with Ned Stark's dismissal and the politics of the Seven Kingdoms, and then pivots—on Cersei's observation that their marriage is what holds the Kingdoms together, which gives them both a good laugh—to a discussion of the late Lyanna Stark. She is Cersei's dark reflection, the ghostly counterpart with whom Cersei can never compete. "I don't even remember what she looked like," Robert admits—but he also admits that Lyanna's memory meant there was never a chance he could care about his Queen. It's a fabulously played scene, which humanizes both of them, but I'm less enthusiastic about Cersei's motives being reduced to the cliché of a woman scorned. I hope—and suspect—that it's more complicated than that.

(In fact, I suspect the Lannisters' father—often mentioned, but so far unseen—will shed a lot of light on how all three Lannisters turned out. I don't know when he'll turn up onscreen, but I have to imagine he's a force to be reckoned with.)

As, it turns out, is his son. By the end of the episode the news of Tyrion's arrest has reached King's Landing, and it has brought the simmering hostility between the Starks and the Lannisters to a boil. Jaime (Nikolaj Coster-Waldau) has previously seemed like a bit of a preening joke, but here he turns out to be a fairly nasty (and surprisingly competent) piece of work; his troops slaughter Ned's men, and shove a spear through Ned's leg, and Jaime himself pokes a dagger through the left eye of Jory (Jamie Sives), the one man Ned completely trusted in King's Landing. 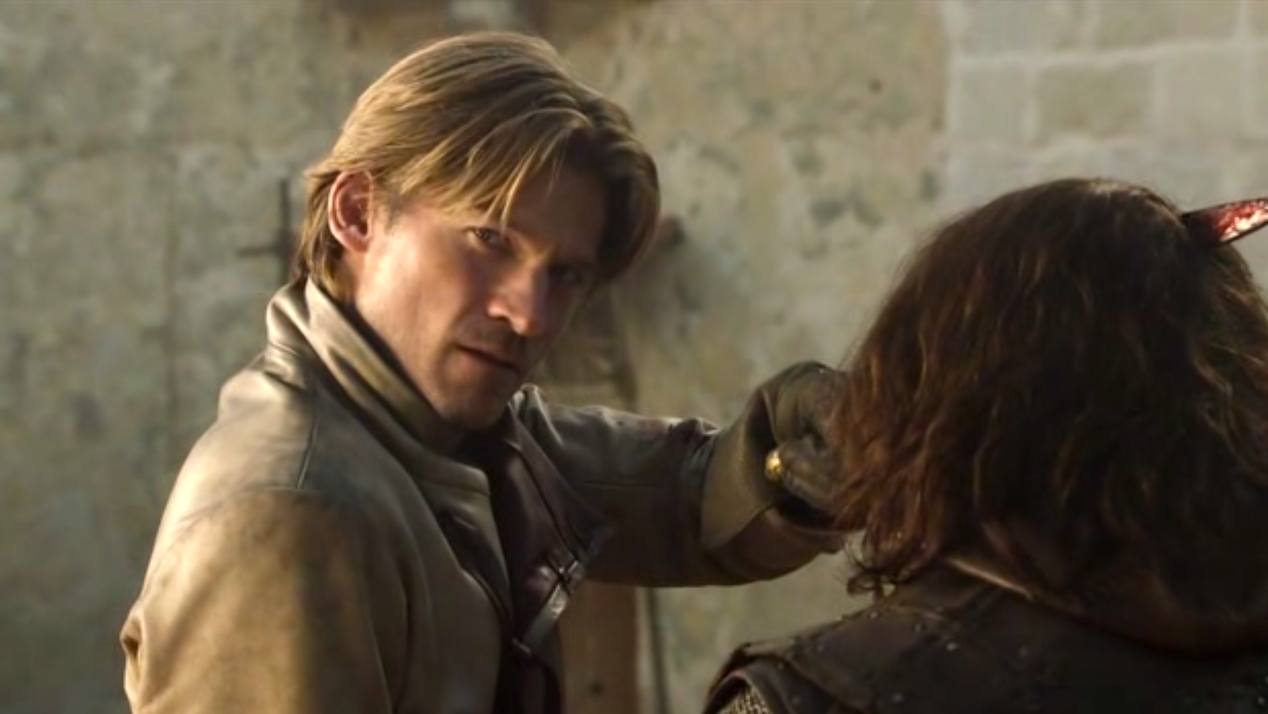 Jaime makes it clear that there will be more blood shed unless the Starks return his brother; unfortunately, that brother has just been delivered to the most impregnable fortress in the realm, into the hands of a woman who hates the Lannisters more than anyone. Yeah. This should all go well.