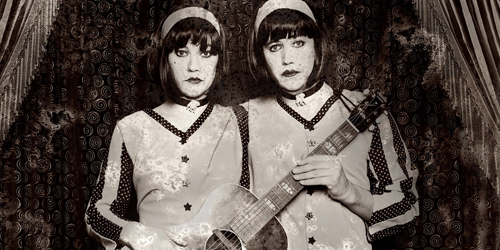 I don't expect to do a great many music reviews on this site—I've reached that age where one only finds new music by accident, and my iPod is mostly choked with audio books and podcasts these days—but every once in a while I stumble upon some new piece of music that becomes an obsession. Most recently, I have fallen deeply, bemusedly, disturbedly in love with Evelyn Evelyn (Evelyn and Evelyn Neville), their eponymous 2010 debut album Evelyn Evelyn, and their tragic, life-affirming, credulity-defying, rags-to-riches, chicken-coop-to-world-tour story.

Evelyn and Evelyn Neville, who turn 26 this year, are (to the best of my knowledge) the world's only conjoined singing-songwriting duo. The two are parapagus tripus dibrachius twins, sharing between them three legs, two arms, three lungs, two hearts, and a single liver. They also share a copious and mercurial musical talent, performing original, deeply personal, courageously autobiographical compositions for piano, ukulele, guitar, and accordion. 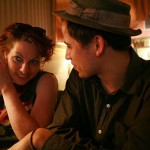 The twins are the friends and protegees of experimental musicians Amanda (Fucking) Palmer and Jason Webley, who discovered the act on the twins' MySpace page. Palmer and Webley were charmed and moved by Evelyn Evelyn's music, which Webley describes as being "like something the Andrews Sisters might have recorded if they had grown up in the circus listening to new wave music."

"When I first heard their songs, I was astounded at the sheer, raw talent and super-clever songwriting," said Palmer, in a February 2010 press release. "But when I found out they were actually conjoined twins who had spent their lives trapped in the circus industry, I wanted to help them reach a new audience." The two musicians befriended the shy but ambitious sisters, and eventually lured them into a recording studio. 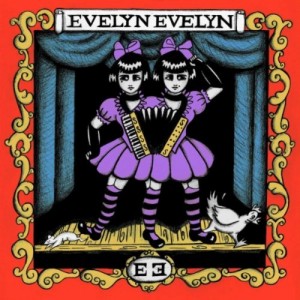 The result is Evelyn Evelyn, a 12-track genre-defying collection. Part concept album, part autobiography, Evelyn Evelyn is a masterpiece: a strange, funny, heartbreaking, twisted musical phantasmagoria that is not unlike listening to a collaboration between David Lynch, Tim Burton, and Tom Lehrer. The nine songs on this album span a dizzying range, as the twins move through musical styles as dexterously as they share ends of the piano keyboard. (The sisters claim a wide variety of influences—ranging from the Andrew Sisters to Joy Division to Jesus Christ Superstar—but they are equally at home in ragtime, country, and the dark, German-tinged theatrical style that former Dresden Doll Palmer has called "Brechtian punk cabaret.") 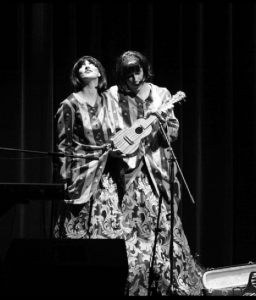 Normally I am a great believer in separating the artist from the art, but in this case the two—like the twins themselves—are inextricably joined. Three tracks of the album explain the remarkable, horrific, stranger-than-fiction events of the Evelyn Sisters' lives, which they themselves recount in dispassionate third-person narration. The remaining nine tracks—eight original numbers and a cover of Joy Division's "Love Will Tear Us Apart"—bravely and beautifully retell that story in music.

It's quite a story. It begins on a small farm on the Kansas–Colorado border in September of 1985— "St Elmo's Fire is at the top of the charts," we're helpfully told—where a young farmer and his wife are expecting twins. "But the birth does not go well"—the young wife expires on the operating table 12 minutes after giving birth to her twin daughters. The crazed physician— "a local denture-maker of dubious training with eccentric religious beliefs" —attempts to separate the newborn girls with a gas-powered chainsaw, and only succeeds in killing their grief-stricken father before being shot dead by the local sheriff (who just happened to be passing).

Thus begins the strange journey of Evelyn and Evelyn Neville, which finds them spending their infancy on the rancid floor of a chicken-coop. (This experience informs the simplest song on the album, the forgivably non-verbal "Chickenman"). The twins spend their childhood in a Lake Winnipeg establishment known as Budding Flowers Entertainment ("specializing in the production and distribution of photographs and VHS tapes for clientele with unique tastes"), entertaining a peculiar number of men, all of whom are introduced to the girls as their "uncles" by the proprietress. (The song "Sandy Fishnets" sadly recounts the rise and fall of one of their friends in this establishment, a beautiful young girl who shines briefly as the brightest star in the Budding Flowers repertory before fading from demand.)

When the twins turn 13 they are sold to Dillerd and Fullerton's Elusive and Illogical Traveling Show (a disreputable circus beset by lawsuits and accusations of human trafficking). It is here that the twins first develop their musical ability, and though they are not free from exploitation—a surprising number of clowns turn out to be their "uncles" as well—they also spend the happiest years of their brief lives so far, befriending and performing with Bimba and Kimba, the world's only known pair of conjoined elephants. The twins enjoy an all-too brief but loving rapport with the beasts, which is celebrated in the charming "Elephant, Elephant."

Eventually the twins tire of circus life, and—following the sad deaths of Bimba and Kimba—set off on their own to make their fortunes in the music business. The power ballad "My Space" is a tribute to the twins' discovery of the internet community, which provides them with the key combination of anonymity and independent promotion they need to find their voices. (You want somewhere to hide/where everyone can find you, they sing.)

It is easy to get caught up—as I have done—in the fascinating story of the Neville Sisters, for it is both a dark tale of exploitation and a stirring testament to survival and adaptation. But to focus on the narrative exclusively would be to do a disservice to the songs themselves, which are intelligent and witty, and which move effortlessly between jaunty and haunting. "A Campaign of Shock and Awe" begins with a sideshow barker's pitch:

Behold, the eighth wonder
Of the natural world!
Come one and come all
See the two-headed girl
Stupendous! Revolting!
You'll be shocked, you'll be awed
A true freak of nature
A blunder of God!

But "A Campaign of Shock and Awe" is not about the sisters' circus days alone; it moves through all stages of their strange life in the spotlight, drawing parallels and finding repeated motifs between life in a whorehouse, life in a circus, and life on the stage. The carny barker's pitch becomes the madame's salespitch to her clientele, before resolving itself to become a record company's promotional copy:

Ladies and gentlemen, critics and hipsters,
Have you heard the new disc by the Evelyn sisters?
Seamlessly floating with grace between eras and genres,
They sing timeless new songs, rife with double entendres.
As featured in Rolling Stone, Spin, The New Yorker, and Pitchfork,
There’s an in-store appearance today at the corner,
Of Bedford and Seventh Ave., come get a photograph, sticker and autographed shirt!

(Smile, they're taking our picture, Evelyn, one sister says repeatedly to the other, between verses.)

The best songs on the album, for me, deal in very different ways with the twins' unusual condition, their constant companionship, their two-headed life. "Have You Seen My Sister, Evelyn?" plays the inseparable nature of their existences for humor in a bouncy ragtime tune:

While the country-flavored "You Only Want Me 'Cause You Want My Sister"—my personal favorite—also uses humor, it is of a slightly darker nature, and ultimately speaks to some very real emotions about one woman who will forever be seen as two:

If you think you're seein' double,
let me save you some trouble:
this ain't no two-for-one bargain here, mister.
I'm much more than just twice shy
I've had enough two-timing guys
Who only want me 'cause they want my sister.

The album's darkest and most poignant song is the title track, "Evelyn Evelyn," a plaintive, psychologically complex exploration of the sisters'  relationship that captures the sadness and sometime resentment inherent in their condition— We grew up so very close/A parasite needs a host—but also the support, the reliance, the sisterly love. Though perhaps their most personal song, it is also a beautiful and bittersweet song of universal appeal, which speaks to the unbearable and unbreakable bonds of family.

I would be remiss if I did not mention that there has been a small firestorm of controversy surrounding the release of Evelyn Evelyn. Some of the early debate raged over the question of whether the Neville Sisters were a "hoax," which I find patently absurd: there is no mistaking the reality to anyone with eyes, ears, or a functioning brain. But the more serious discussion has focused on the question of whether the project is an exploration of difference or an exploitation of it—in essence, whether Evelyn Evelyn itself indulges in the freakshow sensationalism it purports to describe. (If you are interested in this side of things, the strongest voice of dissent came from a blogger named Annaham at Feminists with Disabilities. Palmer and Webley have posted responses. The twins, as is their nature, have remained silent on the issue.) 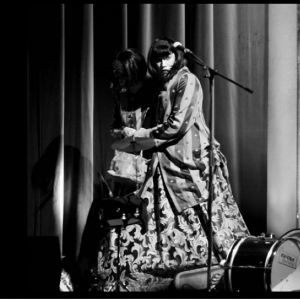 I understand the viewpoints of the dissenters, and they are perfectly valid; I do, however, think they are having a conversation that uses Evelyn Evelyn as a jumping-off point without really discussing the work itself: a little like trying to discuss Lolita in a recovery group for victims of child abuse. (Annaham in particular seems to be writing from the press release, without ever having listened to the album itself.) It is an acceptable use of art, I suppose —though I don't find it an interesting one—and art should provoke conversations, push boundaries, offend, and make at least a few people at least a little uncomfortable. (Personally, I think Evelyn Evelyn works on a number of levels, and I suspect it has far more to say about celebrity and artistic commerce than about disability or ableism—but again, the question of whether it is acceptable to use the latter subjects to discuss the former is valid.)

None of it, however, should dissuade anyone from experiencing Evelyn Evelyn, or be allowed to overshadow the fact that it is one of the strangest, most surprising, most original albums in recent memory. I do not know if Evelyn and Evelyn Neville are still writing music—I suspect they have perhaps said everything they needed to say with Evelyn Evelyn—but I am grateful that they (with the assistance of Palmer and Webley) have given us this witty, haunting, provocative work.