Do fleshbots dream of elastic sheep?

The central ideas of "The Rebel Flesh" are as old as science fiction itself. Writer Matthew Graham (Life on Earth) described this story as a cross between The Thing (an isolated crew unable to trust one another) and The Name of the Rose (spooky monastery setting). But "The Rebel Flesh" (like most science fiction) has a lot of Frankenstein in its blood, from the central questions it asks (What constitutes life?), to the primal fears it plays upon (the idea of our creations turning against us), right down to the electrical surges arcing across a stone laboratory to bring the creatures to life.

For that matter, the ideas are nothing new to Doctor Who, which has certainly seen more than its share of robots, androids, clones, living computers, sentient holograms, brain transplants, patchwork people, and other simulacra of life. Last week's exquisite, mythology enriching episode by Neil Gaiman was always going to be a tough act to follow, and this two-parter—which concludes next week with "The Almost People"—doesn't look to be breaking a lot of new ground. But that's okay: in fact, it's just what we needed at this point in the season: the reminder of good old-fashioned Who storytelling that "The Curse of the Black Spot" failed to deliver.

"The Rebel Flesh" certainly looks like a classic, stand-alone Doctor Who story (right down to the cliffhangers at 22 and 44 minutes), but we'll see how things unfold. I'll reserve analysis for next week, but there are definitely clues here that this story may be much more important than it appears—in both theme and plot—to the season as a whole. 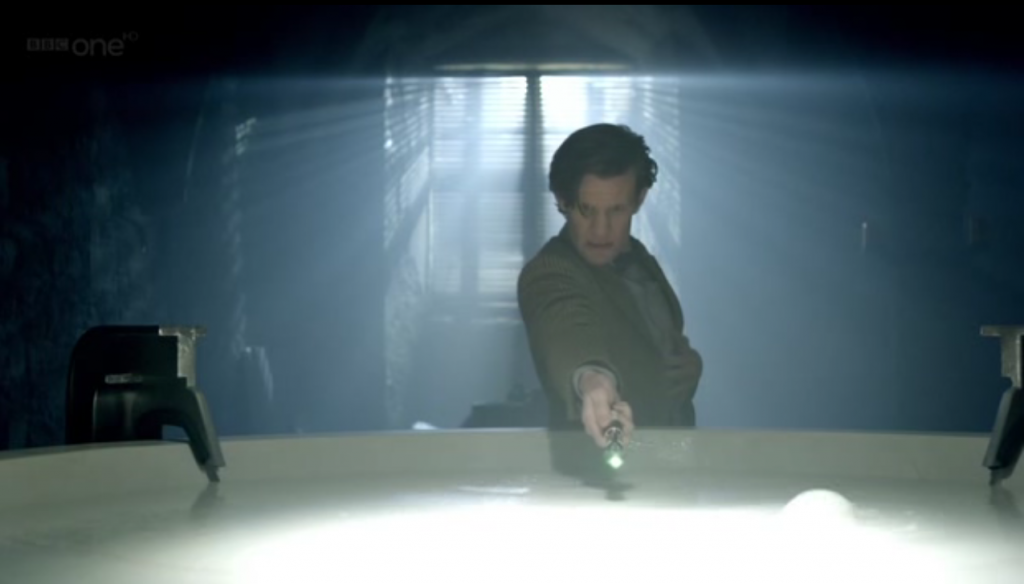 The plot of this one is actually fairly easy to summarize, for once. The Doctor, Rory, and Amy arrive at an island production facility in the 22nd century, where a crew of contractors are working to pump acid to the mainland. To deal with the highly corrosive substance, the crew are using a living substance called "Flesh," which allows them to create perfect, inhabitable spare bodies they call "Gangers" (for "doppelgängers"). To them the Gangers are just tools, completely disposable, but the Doctor quickly realizes that putting a living soul in a human body is creating life, not copying it. When an accident causes the Gangers to exist separate from their human counterparts—while keeping their personalities and memories—the conflict becomes the classic Frankenstein stand-off between creator and creation.

Interestingly, while the Doctor acts as though their arrival is an accident caused by a solar storm, he also seems to have some hidden motives for coming to this place, and some unspoken understanding of what it all means. It would make sense if this story turns out to be "Genesis of the Autons"—the birth of the classic Doctor Who "plastic men"—or even of the Sontarans, who are echoed in both the cloning vats and in the rounded helmets of the acid suits. (Frankly, I hope neither of these is true, as the Gangers are a nice addition to the Doctor Who pantheon in their own right.)

But there are hints that it all may tie into the mystery of Amy's pregnancy as well, since the Doctor is thinking about it right before the Tardis gets swept away—and since it's a little weird if the Doctor isn't pursuing that truth a little more aggressively than he appears. Smith's Doctor is most often compared to Patrick Troughton's, but more and more I see shades of my favorite classic doctor, Sylvester McCoy: this is a Doctor who plays his cards very close to his chest, and one not afraid to lie and manipulate when necessary. It gives a darker, more sinister edge to the Doctor that would have been inconceivable in the Tennant era, but to me it makes sense: he's the smartest guy in the room, the one who sees the interactions and ripples and ramifications of time that we can't see. Of course he thinks he knows best, and might do a few things "for the greater good" that appear quite shitty on first glance.

But it's Rory (Arthur Darvill) who takes center-stage in this story, and it's about time. He and Amy switch roles this week, with Karen Gillan having nothing to do except stand around and arch her eyebrows at the protective, slightly flirtatious relationship Rory has developed with one of the crew members, Jennifer (Sarah Smart, who's wonderful here) and her Ganger. I like that the show was willing to go there: I don't expect Rory to actually "put on his Roman outfit" (nudge, nudge) for anyone but Amy, but it's nice that they're willing to acknowledge that he might be attracted to someone who treats him a little better than Amy does, or someone who more openly needs him.

More importantly, however, this story draws on Rory's experience as an Auton. It's wonderfully unstated in this episode, but Rory is the guy who spent 2,000 years as a plastic simulacrum of himself—and those were his best years. ("Why do you have to be so human?" the Doctor asked him. "Because right now I'm not," Plastic Rory replied.) When Jennifer's Ganger says that she is the real Jennifer—in every way that matters—Rory can't help but relate, because that's the decision he made in "The Pandorica Opens," the only decision he could make and stay sane. If it walks like a duck, and has the soul of a duck, and the nose of a duck (sorry, cheap shot), then who's to say it isn't a duck?

(For that matter, what is the Doctor except soul and memories in a new body? The Doctor is his own Ganger, moving from disposable body to disposable body as needed; no wonder he's not prejudiced.)

What makes this concept slightly more interesting than other stories about what constitutes a valid life form is that this kind of life form challenges our notions of identity, the idea of a unique and individual soul. There's a wonderful moment in "The Rebel Flesh" when everyone has decided to get along—until one of the crewman, Jimmy (Mark Bonnar), and his Ganger, both start talking about how much they miss their son. If the Gangers have a right to life—and certainly we expect Doctor Who to come down on that side—then who has the right to the life back home? (An episode of Star Trek: The Next Generation dealt with this notion as well, when a transporter accident created a second Will Ryker, who was exactly like the first in every way, except for the fact that he was totally screwed out of his life.) "I won't lie to you, it's a right old mess, this is," the Doctor says, and he's understating it a bit. 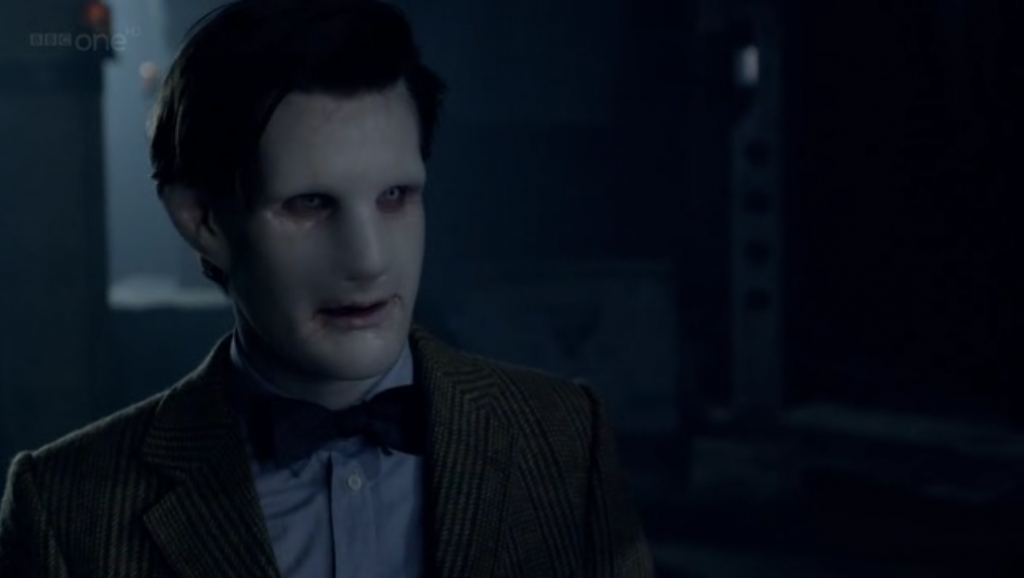 This episode ends with everyone preparing to go to war, and with the (predictable, but still fun) appearance of the Ganger Doctor, because, c'mon, you're going to do this kind of story and not allow Matt Smith to banter with himself? 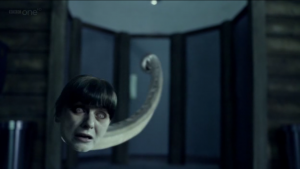