It is tempting to skip over most of what happened in this episode and jump right to the final two minutes, but let's restrain ourselves, shall we? I'm not going to spend a lot of time recapping the story, but—even without the cliffhanger— "The Almost People" is a strong conclusion to this two-parter by Matthew Graham (who has certainly redeemed himself for 2006's series-nadir "Fear Her"), and reinforces some themes that Steven Moffat has been seeding since he took over the show—or even before.

We begin where we left off last week: with the Ganger Doctor turning up. There are a couple of ways this could have gone, with the most obvious being for the two Doctors to antagonize each other, or even for them to take opposing sides in the battle. (In 2008's "Journey's End," the Tenth Doctor treated his other self as a dangerous child, and in the classic series various incarnations of the Doctor tended to bicker and annoy each other whenever they met.) In this case, however—fittingly for Matt Smith's very youthful, very gleeful portrayal—the two Doctors are just delighted with each other's company. Finally, they seem to be saying: someone who understands me. Matt Smith is clearly having a blast here, and so are we. 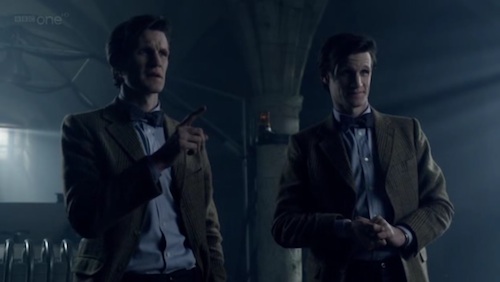 "Are you thinking what I'm thinking?"

"Exactly. So what's the plan?"

"Save them all. Humans and Gangers."

"Is that what you were thinking?"

"Yes, it's just so inspiring to hear me say it."

The script cleverly teases the notion that the Ganger Doctor could turn out to be evil: Amy distrusts him throughout, and at one point he appears to join the rebel Gangers. Ultimately, however, there turns out to be not a bit of difference between them: both Doctors are the Doctor, and in fact they have switched roles without anyone noticing.

Whatever the container, it is the heart and soul that matters. This is one of the fundamental truths of Doctor Who, of course—since the main character has worn 11 different bodies—and it's a theme the show has returned to many times in the Moffat era.

The Daleks, for example, created the robotic Dr. Bracewell in last season's "Victory of the Daleks," but his humanity overcame his programming in the end. The Nestene Consciousness created an Auton Rory in "The Pandorica Opens," but they too made the mistake of underestimating the human soul they put within the plastic shell. And, as we saw in "The Doctor's Wife," even the TARDIS remains the TARDIS, whether she's in a box or a body. By the same token, the Gangers are every bit as human as their human counterparts, and the Ganger Doctor is every bit the Doctor. (Whether this Doctor will return—perhaps to meet his fate beside a lake in Utah?—remains to be seen.)

I do feel this episode copped out a bit on the philosophical and practical ramifications of its setup by ensuring that only one version of each soul remained alive at the end. After all the blood and liquid flesh has been washed away, we are left with the real Doctor, the real Cleaves (Raquel Cassidy), the Ganger Dicken (Leon Vickers), and the Ganger Jimmy (Mark Bonnar). It's a lovely idea that the Doctor uses a phone call from home to remind the Gangers of their humanity, and a nice resolution to see Ganger Jimmy taking over the parenting duties for his late counterpart. But it's also a bit too easy: surely one of the more interesting aspects of this story is the challenge to the notion of ownership of an individual soul. If both Jimmys had survived, which would have rights to the life they both remember, the son they both love?

In fact, the implications of the Flesh—and the central idea of human consciousness as transferable data—are far greater than this episode seems really equipped to confront.
Effectively, the Flesh means everyone can regenerate; more than that, it means they can create infinite copies of themselves. This sets up a similar situation to that of the Cylons in the new Battlestar Galactica, or to the downloadable people in Joss Whedon's Dollhouse; in both cases, the logical outcome was the end of life as we know it. It seems like pretty life-altering technology for humans to have in the 22nd century, and I hope Moffat returns to the idea to explain why it didn't revolutionize the entire history of the human race.

But let's talk about that ending. As was hinted at last week, the Doctor's arrival at this place, at this time, was no accident, and "The Rebel Flesh/The Almost People" was no stand-alone adventure: it turns out to be integral to the season's arc. After playing with our notions of identity throughout the episode—and after having Amy be highly suspicious of the Ganger Doctor—Graham and Moffat have one more surprise for us: Amy herself is a Ganger, and has been all season. (Presumably, since at least Episode Two: my bet is on her having disappeared during the three-month gap between "The Impossible Astronaut" and "Day of the Moon.")

And yet she has been here all season: as we've learned time and time again, it's the heart and soul that count, not the container. Though it wasn't as clear in the episode proper as it was on Doctor Who: Confidential (the "making-of" documentary that airs in the U.K.), the Doctor didn't kill the Ganger Amy (which would have been hypocritical), he just severed her link. The real Amy's consciousness has been animating her Ganger body all season, while her real body lay dormant and pregnant in a maternity ward somewhere else. (Hence the brief flashes of Big Nurse Eyepatch she's been seeing since Episode Two.) This, presumably, accounts for the TARDIS scanner's confusion about her pregnancy: her Ganger body was linked to her pregnant body, across (God only knows how much) time and space. 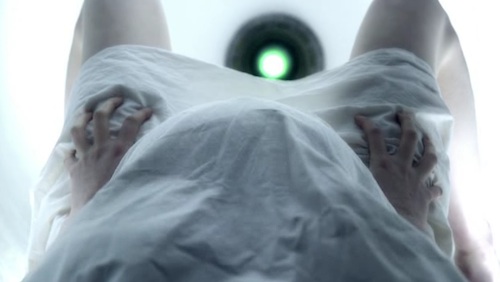 Since Episode Two—and the first appearance of Big Nurse Eyepatch—I had been bracing myself for the possibility that this whole season would turn out to be either an alternate reality or a dream, either of which I would have hated; there is something about that sort of Bobby-in-the-Shower trickery that inevitably makes the viewer feel cheated. But this is so much better: a huge twist that somehow doesn't invalidate what has come before. I confess, I didn't begin to see it coming, and as far as I know no one else did either. I have no idea where it's going, but I love the fact that Moffat can still surprise us, even with hundreds of thousands of geeks like me out there exchanging theories, speculations, and spoilers.

And next week, in "A Good Man Goes to War," we're promised a real game-changing twist to carry us breathlessly into the summer hiatus. The mind reels at the idea of what Moffat considers a game-changer: as Amy says, "I am frightened. I am properly, properly scared." And I can't wait.